My Red Neck Bona Fides, Let Me Show You Them

As if there was any doubt. 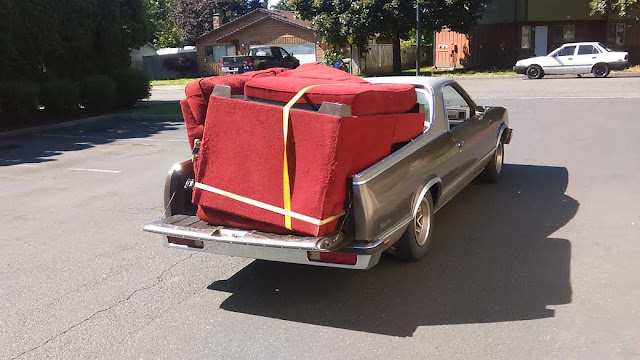 I have hauled more shit in the back of that rig than you can shake a stick at.
That was the third load today.

The In Laws did some upgrading at their place recently and had new carpets installed. So Mom In Law got the new carpet and went and bought a new recliner. Then my Mom In Law decided she didn't like the recliner, she wanted a new couch instead. So the Wife took her out and she bought a new one. I don't know what happened to the old one, the one in the picture is from the Sister In Law's place.

So the Wifely Unit asked me if I would go pick it up and take it to them.
Sure, not a problem.

Well, then I needed to haul the recliner back and return it too, to a different place but closer.
OK, did that too.

The Sister In Law had asked me last week if I could haul the ugly couch up above to the dump.
Why not.
She just lives a few minutes away from the parents so I made it a 1,2,3 shot.

She also had a wooden coffee table my Niece said she wanted but after me and the boy finally got that monstrosity loaded up I said that was enough for one trip. The dump station was closed today over in Oregon so I just had to haul it back here so I can get rid of it tomorrow and I didn't want to be That Guy hauling way too much shit down the road at once. Of course she lives on the second floor of her apartment building and I had the boy go out the door and down the stairs first. That left me blind to the stairs and I misjudged them and missed the last two on my way down. I rode the couch down to the sidewalk but landed on my fucking knees.
You can pretty much guess my reaction to that so I will spare you the particulars.

This all happened this afternoon, I spent yesterday afternoon driving to Washougal and fixing my kid's truck that died on him going down the freeway the other night just out of the blue.

That wound up being an ignition module, right behind the distributor on an 88 Chevy truck with a V-6.
It cost me about sixty bucks to fix it and it was just a WAG that it turned out to be that module.
A WAG is mechanic speak for Wild Assed Guess.
It didn't have any spark and I figured I would start there.
Lucky guess on my part.

So anyways, I have been busier than a three peckered Billy Goat all weekend and decided that instead of driving back to the In Laws to visit that I would just come home and kick back for a bit. Traffic was bumper to bumper from Gresham to Vancouver and it got worse for the poor sonsabitches behind me because some idiot in the fast lane two lanes directly over from me rear ended the guy in front of him about a minute after I finally got off of I-84 and onto I-205 Northbound.

I'm hot and tired and would like a little R&R before I have to go back to work tomorrow.
Oh, I did forget to mention that it is just hot as fuck outside in the sun today and my poor old bald head was just pouring sweat after all that activity.

That was enough for me. I'm going to put my damn feet up and just relax the rest of the evening and I'm going to ignore my phone too, unless someone is dying.
Bleeding ain't gonna be good enough.

You think you have it bad.... I spent the day fishing on Kinzua Dam and my brother caught two undersize walleye and I zeroed out. The weather was beautiful, 80's with a nice breeze, and the boat ran great. Girls in bikinis, jet skis, hot chicks, beer, cocktails, etc. But my brother caught more fish than me two weeks in a row. I did catch a beautiful 38' northen pike last week and have a greater length total but damn, down 2-0 to my brother. Damn the luck. Ten days of vacation coming up and I'm planning on trying harder. Wish me luck. Or, stop up and join us.

Good luck, now get after it!