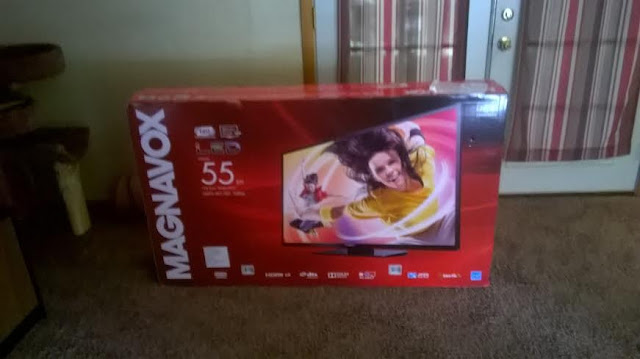 Of course this one was more expensive and she did buy an extended warranty but I'm pretty sure it doesn't cover people whacking the screen with shit.

They didn't offer insurance against such things either so it's pretty much step up and test your luck.

My reprieve against sensory overload was short lived but the wife is pretty much set that we are going to have one of these gargantuan fuckers so hand me the headphones.
I'm also betting that there will be death threats summarily issued to anyone getting within five feet of the motherfucker.

You don't mess with my wifes television viewing habits, bad things happen if you do.

Meanwhile, I finally found an outfit over in Portland that sells metal by the foot so I picked up ten feet of 1 X 1 X 1/8th inch Stainless Steel angle to build a frame for the polished aluminum radiator for this POS Sprite out in the garage.

Electrolysis shouldn't be too much of a concern because it has inserts for the mounting bolts in it already.

We have another fucking wedding to go to tomorrow back where she used to live up in the wind tunnel known as The Columbia River Gorge.

It was freakishly warm and clear last night but that won't last, it's supposed to rain tomorrow.

On the bright side, I finally finished that damn McMinammins Passport bullshit so my weekends won't be spent driving all over the countryside anymore.
That should free up enough time to work on the Sprite, now that it's going to start getting colder than a witches tit in a brass bra out in that damn garage.

Life marches on.
I may be limping but I'll see if I can't keep up.

So what kind of Sprite do you have? My first sprite was a 1968. First thing I did was get rid of the the air pump they had saddled it with. Sucker ran so much better without it too. About that same time "Bugeye Sprite" that I raced in SCCA H production. Got rid of the '68 in a devorse and traded the H production for G production Spitfire. About that time it started getting too expensive to race anymore, so sold the spitfire. About 3 years later I bought another Bugeye for $150. And drove it to classes for a couple of years. This was all in the late 60's early 70's. The '68 Sprite I bought new for $2000. Those were the good ole days. Entry fees were $25 a weekend and camp at the track. Tires were $100 and would last a season. An engine rebuild would last a season.

I have a 65 with the. square rear wheel openings. My Dad had BugEye when I was born and. raced. It for years. I still have. the hubcaps for it
Mine has a 68 or 69 1275 in it I just. Rebuilt that had the air.pump. I plugged. the ports My parents used. to go on road ralleys when. I was a baby and stuff my car seat in between the seats and off we would go.