I know better than to have one though.
There ain't no such thing as sipping on a cold beer where I am concerned.
One would lead to ten and after three years of being sober I really don't need to start down that road again.
I'd be a lying sonofabitch if I said I didn't want one once in while though, especially as hot as it was around here the last few days. But no. 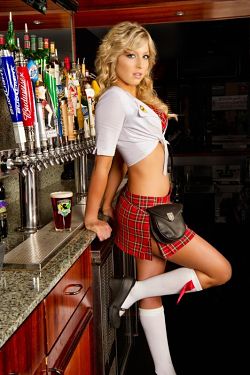 I can tell you they never had stuff like that in any of the bars around here.

That could be from "The Tilted Kilt "pubs,
They are kinda like hooters.

I love capitalism.
Thanks!

There is one near me. I'll let you know if they are any good. I haven't gone yet.

It's early, I just rubbed the sleepy's from my eyes and found your girl

scroll through for some more ;)

I swear, hands, knees, broken glass, mile, just a peek is all.

Lordy that girl is smokin' hot.

I've been sober over 20 years, and there's still times an ice-cold beer would be perfect....

Yep, it's the Tilted Kilt alright.

Been to the one out here many times.