Read this excerpt from an interview with a Rich Guy.
When he starts saying the Shit Is Going To Hit The Fan because the amount of hours one has to work before an employer has to pay overtime is going to get changed by the Guy With A Pen And A Phone, he is fucking serious.
Read on and see how fucked we are already and then imagine what can be coming down the pike here in a short while if someone starts dicking around with what has been a Don't Go There law that affects every single working person in this country.

Today, the average full time worker works 47 hours a week. And they work those [extra] seven hours mostly for free, because today, less than 10% of salaried workers are entitled to overtime. If you earn more than $23,600 a year—if your employer pitches you a fake title like “assistant manager,” they don’t have to pay you overtime. And as a consequence, all over the country people are working for $27,000 a year and working 70 hours a week doing basically: one person doing the job of one and a half. So as an employer I can get two people to do the work of three, and think about what that does for profits... what I’ve done effectively is not just increase my profits, but I’ve taken a job out of the economy, and in so doing I’ve softened the labor market. And the softer the labor market is, the more leverage I have in my wage negotiations. And as a consequence we have this relatively high persistent unemployment. But if employers have to pay people overtime, they’re not going to want to do that. So now I’m going to have to get three people to do the job where two were doing it before. I add a person to the work force. I reduce the level of unemployment. I increase the level of demand in the economy. And I put upward pressure on wages.

Gawker: What is the new threshold going to be?

NH: I cannot tell you. I’m telling you, the shit’s gonna hit the fan.


Like I said above, BOHICA folks.
In this same interview, they are talking about a tipping point, I do believe this would be classified as a screaming over the edge of the cliff at warp speed moment.
If you look at the numbers being bandied about lately comparing the amount of people working and the number of people who aren't and that includes those who won't, this is going to be the death blow for millions of families.
My question is just who in the fuck do they think is going to keep paying the money needed to fund this gargantuan budget these fuckers keep running up year after year?
It ain't gonna be the poor sonsabitches eating Top Ramen two nights a week and working 65 and 70 hour work weeks for the privilege, that's for damn sure.
This country has lost it's fucking mind and the ones who are supposedly running it for the benefit of all have lost touch with reality completely.

If you thought the little party in Baltimore a few weeks ago was fun, you ain't seen nuthin' yet. 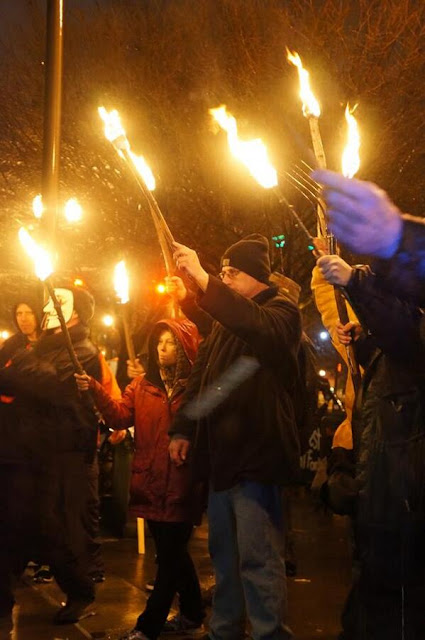 Thanks to Irish, a man among men, for leaving me a link in comments to an article he read a few months back that explains that Advocates actually want the wage threshold raised so that more workers would be eligible for overtime pay.
This of course, brings it's own set of problems.

I remember seeing this article a few months back

Thank you much my man.

That sheds a little light on the subject and presents it's own set of problems.
I sent ya some link love and updated my little rant with the link.

There's just so much stupid in that Billionaire's piece it's amazing.

First, fast food workers and Walmart employees aren't the only people making less than $15/hour. It's going to affect millions of people, many of whom had to go get special training to get where they are. Plus, if they worked long and hard to get to $17/hr, say, they're not getting a raise. So you're (pick a job) that went to two years of college while working at min wage, pulled yourself into a nice position, and now suddenly you get compressed into the same wage as someone in their first job. It's going to be a shock wave of enormous proportions throughout the economy.

Second, in regard to this overtime thing, saying we did this 40 years ago and everything was peachy keen ignores the fact that the world was very different 40 years ago. In particular, China and India weren't competitive in any way, and people were just learning the names Toyota and Datsun.

It's like the idiots who say when we had 90% income tax in the 1950s everything was great, so if we go back to 90% taxes, the economy will take off. In the 1950s, Europe and Japan were bombed back to the stone age, there was no competition from India, China or South America. American companies could charge anything they wanted.