Get ready to eat plant roots again, he says.

Someone should point out to this bonehead that any army fights on it's belly. Starving citizens won't get you very far on your quest for world domination.

I can remember loading forty shipping containers with 100 pound bags of wheat that we shipped to North Korea back in the early 2000's.
Bet me money we will be doing it again.

Kim, whose weight the South Korean government estimates has ballooned to nearly 300 pounds, signaled through state media that the nation could be headed for another famine like the one that killed an estimated 3.5 million people in the 1990s.


Kim, who took over after his father's death in 2012, has put on an estimated 70 pounds in the last year alone. (Associated Press)

"The road to revolution is long and arduous," an editorial in the state-run Rodong Sinmun newspaper said Monday, according to The Telegraph. "We may have to go on an arduous march, during which we will have to chew the roots of plants once again." 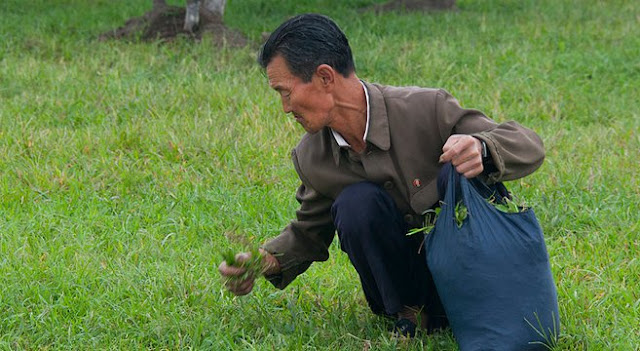 Meanwhile, no fish in the Sea of Japan is safe from his ballistic missile tests.

People that are supposed to know suspect the little Madman has the capability to put small nuclear warheads on these missiles he has been testing.

Much of North Korea's population of 25 million is already hungry, but new sanctions, the most severe in 20 years, were approved by the UN Security Council after Pyongyang’s February nuclear weapons test and a recent long-range missile launch.

The sanctions will further cripple North Korean trade and squeeze Kim's weapons programs. Under them, UN members are even barred from accepting the reclusive nation's main exports of coal and iron ore.

But experts don't expect Kim's belligerence to stop just because the world shuns him. The latest message to the suffering people is yet another one of collective sacrifice.

If he points one of those nukes this way then starvation will be the least of their problems.
at March 30, 2016

as many missiles as he has shot at the fish,do we know if any of them hit where they were supposed to hit?Anyone can shoot a bottle rocket towards a lake,but can you hit the spot you wanted to,over and over?

Do you think that the US government wouldn't do the same thing if it couldn't borrow us into slavery?

Starve the proletariat and grow the military is what Communist regimes do as naturally as breathing. People of the west who have never been hungrier than a 48hr juice cleanse don't understand that food is a very common weapon to use against your own population. I've read quite a lot about it and fully admit that I only understand it intellectually.

The upside - dude is setting himself up for a fast heart attack. Putting on seventy pounds in a year - damn ! Damn shame no one in the regime will take him out.

If they were to aim a nuke at Tokyo and miss but hit a fairly populated area in Japan, what would it matter that they missed their intended target. Same thing if they send a missile to hit Washington, DC and it misses or one to hit LA and it misses.

Dear Japan: Our advance apologies for the radioactive fallout.

Did you think about trading with the ultimate Bitcoin exchange company: YoBit.