So some lawmakers are wanting to make weaponizing little drones illegal. 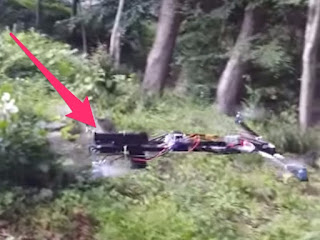 They have already passed laws requiring anyone who flies one of the damn things register with the government or face jail and huge fines.

I have news for these people, this is going to be a problem in the future no matter how many laws they pass, technology is going to advance and clever people are going to come up with more ways to use these little flying contraptions no matter what they do.
Our government has already taken this technology to it's current limits in it Global War On Everything.


A YouTube video of a drone-mounted handgun firing rounds into the Connecticut woods — and a companion video of a flying flamethrower lighting up a spit-roasting Thanksgiving turkey — have reignited efforts by some U.S. legislators to make it a crime to weaponize an unmanned aerial vehicle, the Associated Press writes.
Here is the rest of the Associated Press article:
While the Federal Aviation Administration mulls regulations on drones, a number of states have established their own rules — though most of them focus on drone-mounted cameras as threats to privacy and security. Connecticut would be one of the first to restrict how drone owners can modify their craft into potentially dangerous weapons.
“I am a huge Second Amendment supporter and it would make me very happy because I don’t see any, any civilian purpose for a flying gun,” said Clinton police Sgt. Jeremiah Dunn, whose department investigated the video.
The “Flying Gun” video, posted last summer by Central Connecticut State University student Austin Haughwout, drew the attention of the FAA as well. No charges have been filed but the FAA said last week it was still investigating.
Dunn said his department was instructed by the local state’s attorney’s office that no Connecticut laws appear to have been violated in the first video and that the incident occurred on wooded private property, where a firearm could be legally discharged. Dunn said no local ordinances were violated, either.
The teen’s father contends a new state law is unnecessary, arguing that his son did nothing wrong.
“This is a solution looking for a problem that doesn’t exist,” said Bret Haughwout.


Unfortunately, I have to disagree with that last statement because it is a matter of time before some terrorist jackass uses one to kill someone.

Passing laws is just another impotent reaction to a problem that lawmakers know is coming and there isn't a damn thing they can do about.

Living on the West Coast, I remember seeing many stories about how the Japanese used balloons with incendiary devices attached to them they set loose during WWII to try and start forest fires randomly here in the Pacific Northwest . Fortunately they were unsuccessful but you get the idea.

All it would take would be someone to load up a swarm of cheap drones with something like that and turn them loose around here in late August for all Hell to break loose.
Someones imagination is the limit for the amount of fuckery one could come up with.

Laws have historically proven to be absolutely no impediment for anyone intent on causing death and destruction and this one would prove to be no different.
The technology already exists and we already have examples of people experimenting with it.
at February 29, 2016

THEY can weaponize them all they want but when we mere mundanes do it's a heinous crime. FUCK the feds and FUCK the FAA.