We Are Dealing With Weapons Grade Stupidity Here.

So I got this wild hair up my ass the other day and joined that world class clusterfuck popularly known as Twitter.
Don't ask me why, looking back on it, the only reason I can come up with is because it's cheap entertainment and I really like to fuck with people.
It's hobby of mine, harassing whomever the fickle finger of fate happens to be pointing to at any given time.
Trust me when I say, that outfit is a target rich environment.

So I'm sitting here on my dead ass surfing the web before I go to work and decide to check my EMail.
Lo and behold I have a message on Twitter from some fucking clown I have never heard of before, don't ask me how that works, anyways, this particular fucking idiot decides to make a target of himself by loudly proclaiming in 164 characters or less that he thinks it's a great idea to make gun owners register, license and insure their firearms, just like a car.

All systems operational and locked on.

So I let him have it, just a little at first to see if he would rise to the bait.....


It took a little while but pretty soon it's FISH ON!!

He smarts off right back and then I let him have it.

I haven't heard anything back so there could be a smoking hole in his Twitter account right now.

I mean stop and think about this premise for two fucking seconds.
There are over 500 million firearms currently in private hands in this country right this minute.

These fucking idiots want to register and license them?!!

That's what I want to know, how in the fuck are you in any possible way going to do that?

Look up the word impossible and take it to heart you ridiculously ignorant sonsabitches.

Jesus Christ that level of stupid should be cripplingly painful.

To give you an idea of just what these kinds of idiots are clamoring for, go buy a 100 pound bag of rice.

Take that big bag of rice and get on an airplane. Get up in the air over New York City at cruising speed then dump that bag of rice out the door.

Now go find every grain of rice from that bag and then register and license it.

The thing that really gets me is that these fucking clowns are dead serious when they flap their gums about this shit.
No fucking clue about what they are talking about, just some talking point propaganda bullshit that makes them feel smart when they repeat it.

But hey, with the attention span of a fruit fly anyway, it's hardly sporting on my part to bait them first.

I just can't help yanking their chains when they make it so easy. 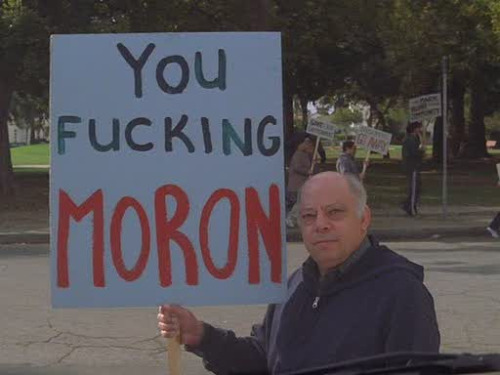 "Don't ask me why, looking back on it, the only reason I can come up with is because it's cheap entertainment and I really like to fuck with people.
It's hobby of mine, harassing whomever the fickle finger of fate happens to be pointing to at any given time."

I'm the same way. If that's your bag you will LOVE a blog called theburningplatform.com Lurk for a bit to get a feel for the place or just jump right in. Always keep your guard up, never reveal your weaknesses and be prepared to back your shit up! If the shit throwing monkeys sense weakness you're fucked. There is no other site like it on the net. Oh yeah, wear a cup!

That's more stupid than I can stand, even to mess with them. Have fun!

well,as a liberal.I agree that we need to somehow account for these weapons,but to be honest....we can't. The NRA thinks every warm body should be allowed a gun,period.A 15 minute background check is a violation of your rights? Here's an example.....my ex's kid ,37,been in prison 5 times since he was 18,2 felonies,a real loser.Ask him what 2 plus 3 is,he'd answer blue......He bitches about not being able to vote!! I don't trust him to fart,much less vote,or even be in the same town as a gun!
Sorry,I do draw the line someplace.Mental tests for buying guns and ammo!

So background checks would stop him from ever obtaining a firearm? With "friends" like his I am sure two phone calls would get him whatever stolen firearm his heart desired.