It's about to get colder than a well digger's ass for those of you East of the Rockies again.

The coldest weather of the season is barreling into the U.S. this week with a series of "dangerously cold" arctic air masses.

The blasts of cold air will send temperatures 10-35 degrees below average for early January, Weather Channel meteorologist Roy Lucksinger said. High temperatures will range from near zero to the teens and 20s across a wide swath of the country.

"This is going to be a big cold outbreak, pretty windy as well," Kocin said. "It's going to drive all the way down south." 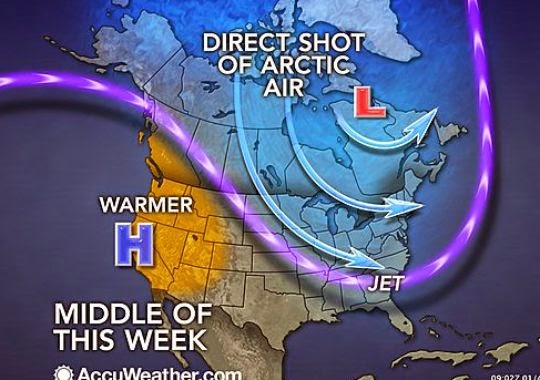 The first cold wave will cover the Plains and Great Lakes through Monday, while a second, even more frigid air mass blitzes into the Plains, Midwest and the East from Tuesday through Thursday, Lucksinger said.

Wind chills will plummet to minus 25 to minus 45 degrees from the northern Plains to the Ohio Valley. Frostbite can occur in as little as 10 minutes on exposed skin at that temperature.

The high temperature Monday in International Falls, Minn., the so-called icebox of the nation, will be only minus 7, with a wind chill of minus 45, the National Weather Service said. The city may eventually warm up to the single digits by Thursday.

In Chicago, the record low temperature of minus 10 could be "smashed" Thursday morning, WeatherBell meteorologist Ryan Maue said.

Someone needs to tell this chick to quit pulling the cold down from up North.

As long as she looks that good let her keep on. Also, damn global warming.

Where the hell is my global warming? I'm in New Hampshire here and we need it!

36 with a wind chill of 28 here in Corpus Christi, TX. Gorebal Warming, ha!

Go down to the local University and enroll in a course in atmospheric physics. Then possibly y'all might start to understand. Just saying boys. Now don't beat the messenger lol

Check out a Farmer's Almanac and look at the cyclical nature of our climate. Piss on your university, I will take empirical evidence over paid for theory any day. Oh, and I'm not beating the messenger, just pointing out facts, like the sea level has not changed here, not one inch in my 41 years. Nor do historic photographs or maps of the area dating back to the 1800s show any changes beyond normal coastal erosion. FDR went tarpon fishing in Port Aransas, the "Tarpon Capital" back in the day. Captain Farley was his guide, look it up. Then the tarpon were gone because the water cooled. They are a tropical fish you know. The last few years they were back, but thinning out again. The water is cooling off too much for them. Just saying...