Still Trying To Control The Narrative In Ferguson

Holder and his goons sure do have the situation under control now don't they.


Move along citizen, nothing to see here. 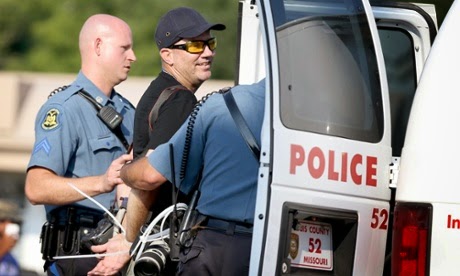 Police in Ferguson arrested a veteran Getty photographer, Scott Olson, on Monday.
Another Getty photographer pictured Olson being led away by officers from the Missouri state highway patrol. Police were preventing people from gathering in the area, and Olson is thought to have declined a request to move on. He was later released.
It was the second time that police have arrested journalists covering the Ferguson protests. Last week Ryan J Reilly of the Huffington Post and Wesley Lowery of the Washington Post were detained for several hours

It's all a big game to them. I think some reporters intentionally instigate getting arrested so they can put it on their resumes. You can see in the picture, everyone is smiling and strangely, the guy getting arrested for "reporting" is himself getting reported while being arrested, and that reporter is free to film the whole thing.