I'm Sure The TSA Is Hiring

Can you believe this?

This asshat had 120 complaints against him before they finally fired his ass!

SEATTLE -- A sergeant who racked up more than 100 complaints during his tenure with the King County Sheriff's Office has been fired by Sheriff John Urquhart.


More than 20 of those allegations were sustained, and Urquhart said the majority concern courtesy, use of force and conduct unbecoming.

snip
On July 30, Stranger reporter Dominic Holden was taking pictures of officers questioning a man on the street when Saulet threatened to arrest him.

Saulet was placed on paid leave while county officials investigated the claims. On January 30, Urquhart notified Saulet that he was fired, effective Monday.

"Suffice it to say, in my judgement, the evidence shows that (i) you abused your authority in your dealings with Mr. Holden on July 30, and (ii) thereafter, rather than be accountable, you attempted to recast events in a light more favorable to you," Urquhart said in his letter to Saulet.

Urquhart went on to say that Saulet's actions in dealing with Holden played into "some of the most basic fears among some citizens, which is that a police officer may indiscriminately exercise his or her personal power in violation of their rights."

Be on the lookout for this thug the next time you go to SeaTac, it wouldn't surprise me a bit if he didn't fit right in with the rest of those TSA goons. 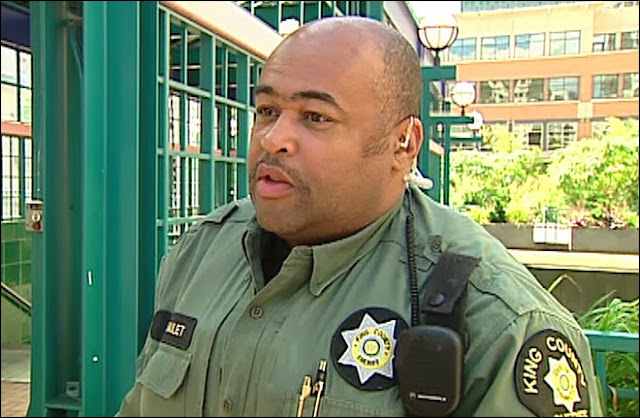 Maybe that reporter dude can sue the pants off the puke.
at February 04, 2014

Fired for use of force and conduct unbecoming.
Pull his gun license. And confiscate all his personal weapons.