It's A Gas Gas Gas 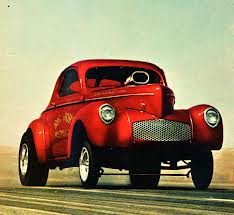 A gasser was a type of hot rod originating on the dragstrips of the United States in the late 1950s and continued until the early 1970s. Gassers were based on production models from the 1930s to mid-1960s, which have been stripped of extraneous weight and jacked up using a truck beam axle to provide better weight distribution on acceleration (Beam axles are also lighter than an independent front suspension), though a raised stock front suspension is common as well. Common weight reduction techniques include fiberglass body panels, stripped interiors and plexiglass windows (sometimes color tinted).

Because they were primarily built for racing, these cars typically had the engine swapped to a larger or more powerful one, the existing stock engine modified (often heavily) or both. It was very common to fit a Roots supercharger and mechanical fuel injection, such as one from Algon, Hilborn, or Crower.

With form being dictated by function, their appearance is often very top heavy and ungainly, largely due to front ends being raised higher than stock, to assist in the weight transfer during rapid acceleration (racing).[citation needed] Having their exhaust pipes exit through the front fender well is a common characteristic of gassers[citation needed], as is having bodies painted in flamboyant metalflakes, pearls, and candy finishes complemented by lettering in wild fonts.[citation needed]

The name arose because they competed in a gasoline-fueled drag racing class, rather than one using methanol or nitromethane.[citation needed]

The gasser is the predecessor of the modern Funny Car.[citation needed]

Fucking Wikipedia.
They forgot the most important attribute of a Gasser,

The inspiration for this post can be directly blamed on TSP. There were some great drag racing videos over there!

I have been absolutely in love with those old Willys Coupes since I was knee high to a chopping block.

I worked for a guy years ago that had one built out of a English Morris Minor. That thing was scary fast. He had but a bored and blown 454 Chevy with a old 2 speed powerglide transmission in it. I wish I had pictures,

A '41 Willys has always been one of my favorite cars. That and the '55 Bel Aire. There was an insane dude that used to run an Anglia with a blown nitro burning Keith Black Hemi at our (sadly gone) local strip. He always did a by-run, because that short wheelbase little bugger needed both lanes! I loved it when he ran, because after his burnout and his crew chief flipped on the other magneto, I would plug my ears as he staged, then watch everyone else slap their ears when he took off. Heh heh heh... That and I love the smell of burnt nitro :)

Fun for sure! From drag racing my '65 Hi-Po on the roads, until today, I have never been interested in any other kind of racing.