Seattle Mayor Agrees That Statue Of Lenin Must Go Too

Take that ya fuckin' Commie assholes.

Seattle Mayor Ed Murray and a handful of President Donald Trump's most ardent supporters agree: It's time for Fremont's statue of Vladimir Lenin to come down.
During an interview with KIRO Radio 97.3 on Wednesday, Murray advocated for the statue's removal in response to a question, saying:
"In the last few days, Seattleites have expressed concerns and frustration over symbols of hate, racism and violence that exist in our city. Not only do these kinds of symbols represent historic injustices, their existence causes pain among those who themselves or whose family members have been impacted by these atrocities. We should remove all these symbols, no matter what political affiliation may have been assigned to them in the decades since they were erected. This includes both confederate memorials and statues idolizing the founder of the authoritarian Soviet regime. Both are on private property, but I believe the confederate memorial at Lake View Cemetery and the Lenin statue in Fremont should be removed. We should never forget our history, but we also should not idolize figures who have committed violent atrocities and sought to divide us based on who we are or where we came from."
Murray's statement came a day after a small group led outspoken Trump supporter Jack Posobiec demonstrated in front of the statue, equating it with Confederate memorials being removed on the East Coast in the wake of last weekend's deadly violence in Virginia. 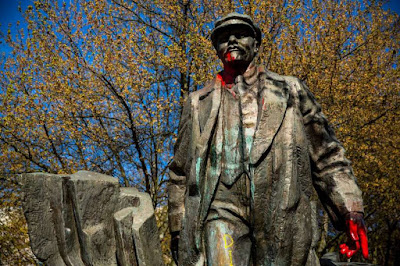 That is going to cause the left to crap double edge razor blades!