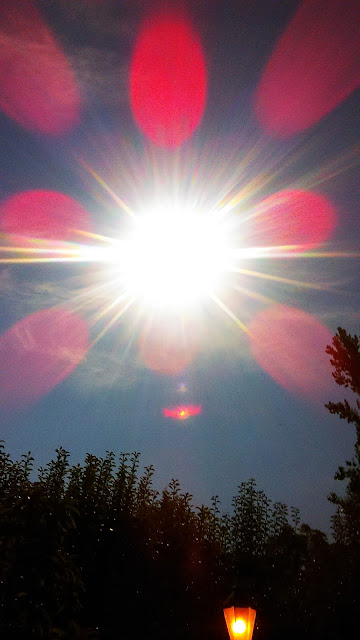 . Strange light effect on cheap cell phone at 98% of totality.

Updated, Actually, the wife informs me that we experienced a 99.2% eclipse so that glare on the lens is less than 1% of the suns full energy. I could see those red spots on the screen of my phone when I took the picture but thought it wouldn't show up when it was done.
I have no idea why it did that but it's a pretty cool picture anyway.
Notice the street lamp is on at the bottom of the picture at ten something in the morning on a normally bright, sunny day.

Even though we came close to a full eclipse and all we could see at maximum coverage was a tiny splinter of light right at the top, it was too much of an angle with too much visible light to see the corona.
It was still pretty awesome to watch and we had an excellent vantage point twenty minutes from home with zero traffic worries.
When it was over we just strolled down the grounds here at Edgefield and found some chairs to flop in underneath a covered area.

Now I'm going to take a nap, a couple of the women folk were up half the damn night keeping me awake and I got up at 7:30 this morning so we could get breakfast in the restaurant out of the way before the eclipse hit.
at August 21, 2017

The sun was noticably dimmer here in Long Beach, but it's back to normal now.

We had an overcast day. About 1:18pm the darker clouds moved out of the way and thru a less, thick cloud, could make out the two shades of brightness, the sun and the moon.The view lasted about a minute. then the dark clouds returned.