A Sense Of Satisfaction Denied By Design For Too Long

I had to break down and replace the radiator in the Caballero this morning.
It has been leaking for a couple of months but being a mechanic, it was one of those things that you just "keep an eye on" for a while before it finally just shit the bed and started leaving puddles the size of dinner plates under the front end after just a short two mile round trip to the local Mini Mart.


When it gets to that point, it then becomes, " I really should replace that" for another few days 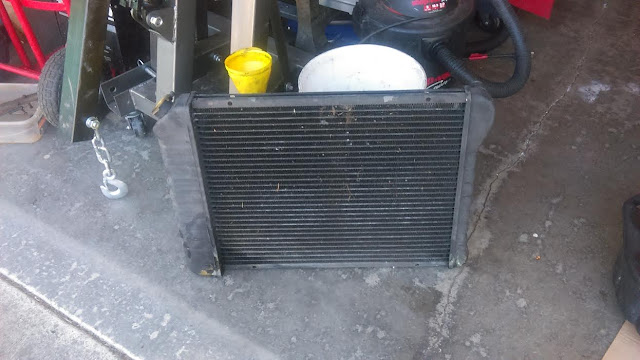 I finally quit driving it because the weather was nice enough that I could just drive the Sprite.

I'm not stupid enough to think that nice weather is going to last forever around here so Thursday I ordered a new radiator and yesterday I zipped over to NAPA and gently set it in the little car and took it home.

It's been a bit warm around here recently and after I got woke up and went outside to start in on this little project I discovered that it was getting downright hot with a stiff breeze blowing hot wind around.
I threw a tarp on the ground, pulled up over it then set a drain pan under the front and opened the drain.

While it was getting busy making the inevitable mess, I went and snagged some tools and started taking shit off to get at it.
It really didn't take many tools, some I got out just because I did this kind of shit for a living for many years and had some little specialty tools to make things easier.

Shit like a set of Snap On hose removal tools to help avoid busting open yet another knuckle trying to rotate the hoses off the radiator inlet and outlet nipples after they glue themselves on. 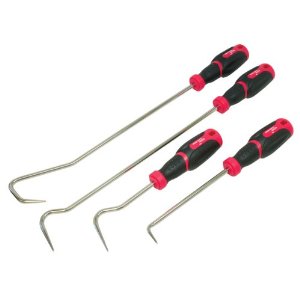 It probably took me a little less that one whole hour to do the job.
I was in no hurry but the heat finally started getting to be enough that it was time to get done with it and flee back into the house.

One quick way to tell it is getting too damn hot to work on your car is to reach down and grab a wrench that has been sitting on the ground for a half hour and burn the shit out of your hand.
Yeah, that's enough of that.


Where I am going with all this is the fact that while I can do these repairs and still get a sense of accomplishment and satisfaction from doing it, millions of other people either can't because they don't have the tools and the skills, or even worse in my mind, they are denied the opportunity by design.

I worked in a Lincoln/Mercury dealership for ten years back in the 90's and watched the automotive technology explode.

Along with all the fancy new bells and whistles, gizmos and what the fucks, I noticed a rapid trend of making cars harder and harder to work on.

Ford Motor Company even went so far as to say out loud that they were working to make it so that the general public would find it impossible to work on their own vehicles eventually because Ford wanted them to have to take it to the Dealer so they could trap the market on repairs.

That is some evil shit right there pal.

Pretty soon things like John Deere Tractors and even Printer Cartridges were off limits to monkey wrenching, by design and by legal clauses written by scumbag corporate lawyers.

This has now been going on for twenty some years but there is finally some hope for potential mechanics and other people who would like to repair the consumer products they pay for and own outright, even if it only involves changing some code in a computer program.
There is even a groundswell of grass roots voices calling for the right to repair the things you buy and own called The Right To repair Movement,
which has gotten so serious it has morphed into something called The Repair Industry.

One very surprising and powerful source of hope is the United States Patent office of all places.

In one of the biggest wins for the right to repair movement yet, the US Copyright Office suggested Thursday that the US government should take actions to make it legal to repair anything you own, forever—even if it requires hacking into the product's software.

Manufacturers—including John Deere, Ford, various printer companies, and a host of consumer electronics companies—have argued that it should be illegal to bypass the software locks that they put into their products, claiming that such circumvention violated copyright law.

Another HUGE win for this movement was just delivered by the United States Supreme Court when they ruled against a single use printer cartridge manufacturer who had sued a guy because he was buying the used cartridges from all over the place, disabling a computer chip that was the reason it only worked one time, refilling them and then selling them.

The Supreme Court heard arguments in March and considered the principle of patent exhaustion. This idea stipulates that a patent owner's rights over a product should vanish once the patent owner sells the product to a consumer. By attaching a post-sale restriction to its single-use cartridge, Lexmark aimed to create a zombie patent that's never exhausted. You may have bought that cartridge, but Lexmark still controls it.

The justices agreed 7-1 that Lexmark can't do that. (Justice Neil Gorsuch was appointed after the court heard the case.) The court held that Lexmark exhausted its patent rights when it sold its cartridges "regardless of any restrictions the patentee purports to impose." To allow otherwise, the justices ruled, would adversely impact the economy.


But the Fat Lady isn't singing yet because now the trend is going to using the fine print in End User Licensing Agreements to deny peoples rights to repair items.

With the Supreme Court issuing a definitive ruling on patent exhaustion, expect manufacturers to turn to contract law—like sneaky end user licensing agreements—to enforce their will. You already see it happening. John Deere, after losing a copyright law fight to folks like Repair.org, simply updated its EULA to block software modification in its tractors. Litigation dodged, problem solved. "They can't infringe upon your ownership rights if you've already signed them away," Gay Gordon-Byrne, director of Repair.org said.

How many " licensing agreements" have you ever either completely ignored or glossed over ?
Thousands probably.

I am solidly in the camp of the Repair Movement.
If I bought it, I own it and I will do whatever the Hell I want to with after I take possession.

The way I see it is that even though things like Designed Obsolescence have been around a long time, if there is a will, there is a way to fix something. There is enough crap that was deigned to be unrepairable out there as it is.

People should be able to use their creativity to try do so without having to worry about getting sued by some asshole company trying to lock up the market on available repair monies.

about 20 years ago i was delivering our beater to the mechanic. he apologized for keeping me waiting as he was working on a new car.
i wished aloud that we had a new car.
he said, 'no, you don't. i am just doing a tune up but had to pull the engine to reach the spark plugs.
they are made impossible to get at on purpose.'.
greed!!

When the VP for service and support for the I strument company I work for was asked why we didn't make our systems so they wouldn't break as often, or not at all hardly (like TV sets), his response was illuminating: "how would we replace the lost revenue we get from our service organization?" The idea of reliability as a competitive advantage to more than make up for lost service revenue was not on management's radar at all.

Agree 100%, Phil. I bought the item, I should be able to do anything I want with it.

For years now G.M. has been trying to implant micro chips in its sensors and switches so that if you did not use the Delco part it would set a code saying the part was bad.

If the company wants total control on fixing the item they should fix it for free. No matter how old it gets.