For yard work and garage sales.

I spent a little over an hour in the disaster area of a back yard we have to deal with here and completely filled up the back of the El Camino with debris.

I threw a couple of ratchet straps over the pile and took it to a recycling outfit that's a little over five minutes away to get rid of it.
Bunch of branches, blackberry vines, sapling sprouts, weeds and other crap I raked up.

They only charged me $3.25 for the load so I can't complain too much about that.

On my way out of the immediate neighborhood I saw a bunch of garage sale signs so nothing would do but to swing by a couple on my way home.
Both of them were within three blocks and I skipped yet another one right down the street.

There were some deals to be had for someone with an eye for certain things besides baby clothes and the usual crap you see at these disposal sales.

I picked up two nice cloth rifle carrying cases for $5 apiece, a couple of medium sized ice chests that we find we need every damned 4th of July and then immediately forget about and one of those 3 clawed garden hand tools I was wanting earlier today.

I have been to this place before, a couple of times, last year.

It's one of those constant garage sale every weekend all damn Summer long kind of deals.
I think they go around to other sales, get stuff dirt cheap and then drag it home to resell it at a substantial markup.

Gotta watch what you buy there very closely.

The other one was a nice couple right around the corner and they had some good stuff and some good prices on it.

It's a good thing I didn't have way too much money there because I could have dropped a couple of grand without blinking an eye.

A nice Lincoln wire feed welder with the cart, tank, hood and all for $500.
A complete computer driven CNC machine, the kind that hobbyists use on a sheet of plywood with all the drive motors and everything for $750.

Yeah, Thank goodness I don't have room for that kind of shit.

There was however a couple of too good to pass up deals that I snagged right up.

One of the old timey space heaters that worked for one dollar and these little beauties, 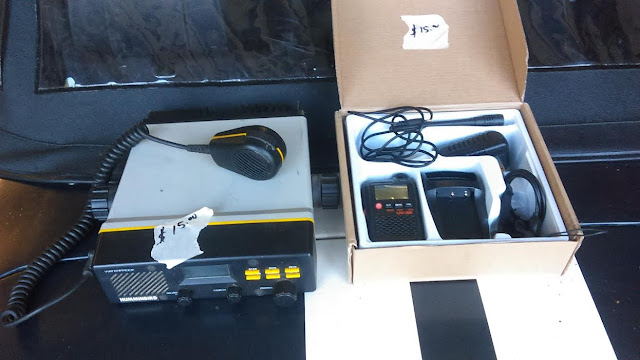 A Hummingbird Police scanner and a brand new, still in the box Baofeng two way radio.
The stickers say $15 each, I got all 3 items for $25.


I have been wanting a scanner for a long time.

On the way back from the yard debris place I stopped at the local Mini Mart to get something to drink and in the few minutes I was inside there were no less than five Vancouver city cops go by with lights and sirens going. Pretty quick traffic started backing up on the main drag in front of the store and some lady came in and said they had a furniture truck pulled over. She also said all the cops had their guns drawn and she saw one with a sniper rifle get out of a car.

I told her they were pretty damn serious about using your turn signals in this town anymore then paid for my shit and slunk out the side street.

No need to go rubbernecking around that kind of shit I don't think.

I picked up the scanner fifteen minutes later.

It would have been interesting to see what the hell they were so excited about.

The power plug is missing off the back but I don't think that will be much of a problem. A little Google-Fu ought to take care of that one way or another.

After getting home and opening the garage door I was struck by the notion that maybe it's about time for me to have a garage sale myself.
It would beat paying to take stuff to the dump and make some much needed room at the same time.

They are a pain in the ass to get ready for but a few extra bucks and some empty space in that garage out there are pretty compelling reasons to maybe just do that before too long.
If I can find the time.

You got a good deal and The radio`s are great but the antenna on the HT sucks .Poor Reception You can get a good antenna for a few bucks .

I too have no desire to check out police situations. No need to be that guy shot by a stray round.

You may find the scanner less than useful...police comms have been switching to encoded digital transmissions for about a decade.