We have this cute little long haired black cat that looks a lot like this one I snagged off Google images because I'm too lazy to take it's picture and fuck around getting it on my laptop. 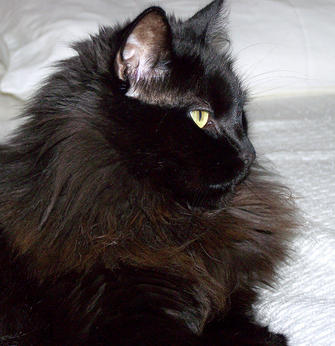 Anyways, this thing is cute as hell but a real pain in the ass because it constantly wants in and out all fucking night.
It scratches on the door and yowls until you relent and either let it in or out, depending on which side of the door she is trying to claw through.

It makes one wonder just what it is out there that is do damn fascinating.

I was just outside a minute ago to have a smoke and here is the little fucker just sitting in the driveway reconning our yard, the street and a few of the neighbors yards when it came to me.

The little shit is just waiting for some small furry critter to make the mistake of skittering into it's field of vision so it can go kill it.

Murderous little wench that she is, this happens more often than one would think.
A couple of times a week there will be a half gutted mouse laying tits up either on the sidewalk leading to the front door or on the concrete patio outside the sliding doors in the back.

I'm sure there are the remains of more scattered around that I haven't run into yet too.

If it moves, it must die.

That is your cats way of saying she loves you...