Ol' Pussy Boy must figure that he is untouchable and has nothing to lose.

This article also points out that he is coming up a little short on something called proof.

Obama slaps Russia with sanctions for meddling in the U.S. election

In the most sweeping retaliation against Russia in decades, President Obama slapped Russia with new penalties Thursday in retaliation for meddling in the U.S. presidential election, kicking out dozens of suspected Russian spies and imposing banking restrictions on five people and four Russian organizations the administration says were involved.

“All Americans should be alarmed by Russia’s actions,” Obama said in a statement. “Such activities have consequences.”

The penalties were aimed at punishing officials in the government of President Vladimir Putin, among them agents linked to email hacks of top Hillary Clinton campaign officials and the Democratic National Committee.

They included sanctions of two of Russia’s intelligence agencies and three companies the U.S. said provided support. Additionally, 35 Russian officials in the U.S. were ordered to leave within three days and access was cut off starting Friday to two Russian government-owned compounds, one in New York and one in Maryland.

Clinton has blamed Putin himself and told supporters that he went after her because of a “personal beef” against her. President-elect Donald Trump has dismissed the idea that Putin was involved or that the leaks affected the outcome of the election.

Obama has all but blamed Putin personally, telling reporters before Christmas that very little happens in the Russian government without Putin’s knowledge.

The interference in the American election calls for retaliation, administration officials say. Obama has said that he would make some of the penalties known publicly, but that his administration will launch other retribution that they don’t discussion.

Thursday’s announcement came while Obama is vacation with his family in his childhood home of Hawaii.

The retaliation is certain to exacerbate tensions with Russia during the transition from the Obama presidency to the Trump presidency. Trump has suggested that he plans to let the matter rest.

“We ought to get on with our lives,” Trump told reporters Wednesday.

Trump has rejected conclusions from the Department of Homeland Security and the Office of the Director of National Intelligence that the Russian government was behind the hacks of computer systems and emails belonging to Democratic Party officials.

“If the United States has clear proof of anyone interfering with our elections, we should make that known,” Spicer said. “Right now we need to see further facts,” he said.

“You have a lot of folks on the left who continue to undermine the legitimacy of his win and the nature of how big that win was, and that is unfortunate,” Spicer said.

So, Obammy, you're going to get all pissy because the Russkies hacked Hillary's unsecured Email server and shared the contents of a bunch of Emails that were already under subpeona.

Let me just point out a little hypocrisy here on behalf of the government of the United States.

This is hardly the first time a country has tried to influence the outcome of another country's election. The U.S. has done it, too, by one expert's count, more than 80 times worldwide between 1946 and 2000. That expert is Dov Levin of Carnegie Mellon University.

Better enjoy this last taxpayer funded vacation while you can wussy boy, then start packing your shit.

Then we can start clearing off the kiddy table and let the adults back in the room to take care of business. 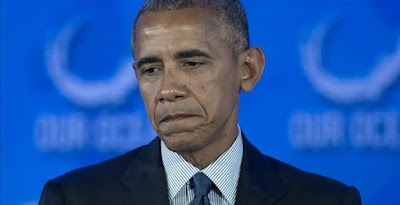 Obama is more full of shit than a whale with no anus!

You sir are crazier than I am, If you don't mind I would like to add you to my limited blog list. Keep up the good work !

You sir are crazier than I am, If you don't mind I would like to add you to my limited blog list. Keep up the good work !

It's nice to see my efforts are not in vain. LOL!!

By all means good sir, as you can see you are already on mine.

AMERICAN LUNACY at its best

WITH NO PAINFUL HANGOVER

Pretty much, right?
The little faggot is a vindictive twat.

Hell hath no fury like a woman scorned seems to fit.