It's a start.
I'm not holding my breath for Trump to perform any miracles once he gets into office but there are a few things I would like to see and this is one of them. Quit allowing these fucking people to not only get rich from the revolving door bullshit but also stop them from being able to influence policy while they are doing it.
You work for the government for the betterment of the country, not to line your pockets selling favors to lobbyists.

Appointees to President-elect Donald Trump's administration will be asked to sign a form barring them from being a registered lobbyist for five years after they leave government service, officials announced Wednesday -- following up on the D.C. outsider's pledge to "drain the swamp."

Republican National Committee chief strategist Sean Spicer said on a conference call with reporters that the prohibition would help to ensure people won't be able to use government service "to enrich themselves."

In addition, Spicer announced that Trump transition team members would be barred from lobbying about the issues they had worked on for six months after their departure. He did not immediately explain how either ban would be enforced.

The new Trump transition policy is one of several aimed at curbing the influence of lobbyists. During the presidential campaign, Trump vowed to institute a five-year lobbying ban for all departing members of Congress and their staff, in addition to executive branch officials.
Snip

His White House predecessors have made similar promises. 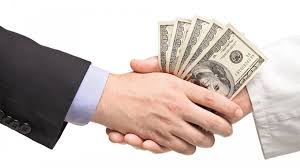 He's going to have a hard time filling positions with that rule in place. That's good as we get some new faces who actually want to help the country.

hey it is tough living for a polictican

they need the graft and bribes