My Inner HillBilly Will Not Be Denied

I'm tellin' ya, the older I get, the more it comes clawing to the surface and the more it manifests its self.

I did have real, live, Ozark Mountain HillBilly's in my family tree, I met some of 'em once.
My Mother and her side of the family were all from down South. Tennessee, Missouri, Arkansas, Georgia, all over the damn place back there.
My Grandfather was from Tennessee and moved back there after my Grandmother died. He is buried back there somewhere now.
He is where I get this Tinkering gene from.

The man was a mechanical genius, natural born.
He built a portable Gold shaker once from scratch after seeing a picture of one in a magazine. It had a water pump on it and a motor driven shaking platform on it with two wheels and handles on it to roll it down by the creeks he used to work.
He was a Mill Wright by trade but he built houses from the dirt lot to the roof by himself in his spare time and then flipped them. I don't think there wasn't anything that man could not fix or get to run if it was supposed to.
I will never forget the time he drug home this old nasty and moss covered tractor that had been sitting out in field on the Oregon coast for years and years.
I mean this thing had an inch of moss on the engine cover, what was left of it.

He messed with that thing and messed with it for weeks. Tore the carburator off and rebuilt it and got the engine all cleaned up and ready to go but he just couldn't get any spark out of the magneto.
The man was the epitome of stubborn though.

One day he was working on that thing after Grandma had made one of her six course breakfasts she was so famous for and had cleaned up the kitchen. She had about an hour or so before she started in on Supper.
Ol' Grandpa yanked the magneto off that tractor and snuck in the kitchen with it when she was watching her soap operas or something because she most certainly didn't see him do it.
He turned the oven on low and stuck that magneto in there and run back outside real quick.

All was quiet for about an hour , he was out wrenching on the damn thing and Granny was watching her General Hospital or whatever it was.
Pretty soon she gets up and heads into the kitchen to start in again and notices the oven was on.

I was sitting at the table with my thumb up my ass as usual and she asks me why the oven is on.
I may be a lot of things but stupid aint one of 'em.
I told her I had no idea.

So she grabs an oven mitt and yanks the oven door open and The Shit, Hit The Fan.

She didin't know what it was but it damn sure didn't belong in her oven and she instinctively knew it had to be something off that tractor.
Now neither of my Grandparents EVER, cussed. They were Old School and that was just something you didn't do.
Except this day.

JACK JOHNSON! YOU GET IN HERE AND GET YOUR GOD DAMN TRACTOR PARTS OUT OF MY OVEN!!

I'm sure even the neighbors heard that one.

Oh she was hot man.
Sacrilege!
She is cussing and slamming shit down on the counters and pretty soon here comes Grandpa, like two seconds later.
He grabs her oven mitts and yanks that magneto out of the oven and takes off running before she even knew what had happened almost. That REALLY pissed her off, taking the oven mitts.

Now she is after his ass boy.

She has her rolling pin in her hand and is out the door after him.
He is busy juggling that hot magneto back and forth in his hands and here she comes.
He run around the back side of the tractor and she is out there yelling at him and waving that rolling pin around trying to get a shot at him.

He took off out back towards the shed but she was satisfied that he got the message and grabbed up her oven mitts, turned around and give a good glare in the direction he had fled and stormed back into the kitchen.

I was laughing so hard my sides hurt but I was well out of swinging distance too.

Pretty soon Grandpa pokes his head out of the shed to see if the coast is clear and runs over to the tractor and starts throwing that magneto back on.
I went back in the house and Granny was still fuming and banging the cookware around when all of a sudden I hear that tractor engine turning over and it fired up.

The old guy was pretty cagey about the whole thing but that did the trick.
It had gotten moisture in it from sitting out in the weather for all those years and he got it hot enough to dry it out.

I'll never forget that scene as long as I live.

So now you know, I was born and raised out here on the West Coast but I have HillBilly in my blood and it won't be denied.
So in Grandfathers honor, I went out and bought a piece of shit Walking Tractor, just like one of the several he had back in the day.

Know what?
It's been sitting for so many years the damn wheels have rusted clear through and....
it has a magneto on it.

Now you know why that memory came flooding back after all these years. 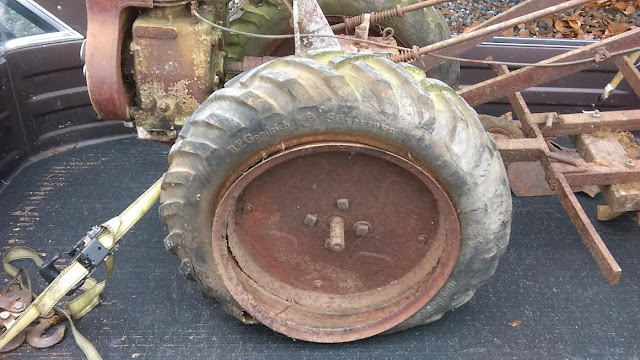 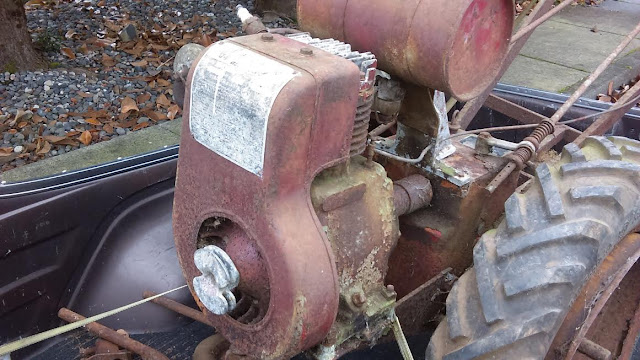 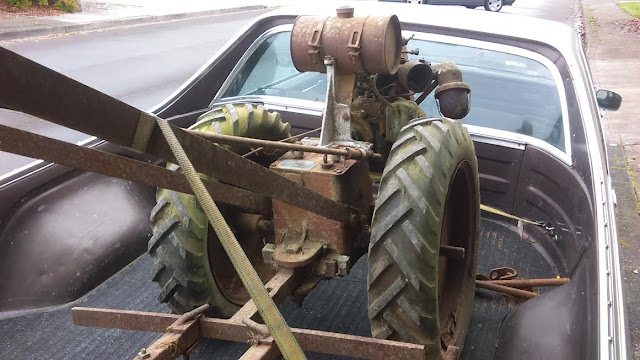 Thank you.
Those two were quite the pair.
They don't make folks like that anymore, they would give you the shirts off their backs and you damn well never left their house hungry.

They were of the class of what I've always called "Good People".

That was something my Daddy taught me at a very early age. There are Good People and Assholes.

And they both come in all sizes, shapes, colors, and backgrounds.

And that knowledge has served me well all these 65 years I've been walking on the planet....

After looking at your project I feel better about getting my motorcycle back on the road. You didn't get enough suffering from your car project?

I know what you're gonna do. You're gonna make that thing run, just to prove you can make it run. I can't fault you for it though. I did the same thing with a 1951 Mall chain saw that I bought a few years back. However, in the long run, you will be much happier buying a used garden tractor off of Craigslist for $100 and using the electric start motor out of that. You'll get a few extra horsepower to boot. Otherwise, you will get tired of that no recoil rope start very quickly. Oh yeah, I think you mentioned in an earlier post that thing has a Wisconsin engine. They are becoming more and more difficult to get parts for.

You mean he one I'm not done with yet?
Lol!
I also picked up a self propelled reel type lawn mower while I was waiting in line at the dump last Summer that needs attention.
It's a MClain I think?
it has a plastic bin on the front for the clippings and looks like it was not used very often. I had never seen one before and looked it up on the internet.
They still make them and they cost $1300 new. The wife has already started in on me as I knew she would.
LOL!
It gives her something to complain about.

You are right on the money.
The Wisconsin parts I will find, it's the wheels that have me worried.

Great story and everyone should have one or more projects going on in their life.

from toronto airport to budapest, hungary [nonstop] and then bus to subotica, serbia, free bus if enough dental patients.

many cafes nearby cheaper much than here.

need passport but not visa.

get a loan from the credit union or from your friends.

take your xrays and the list from your dentist if you want but they do everything there.

leave from toronto, less hassle and less jack-booted thugs.
you will love it. do it soon.
no morlocks, clean civilized city.

p.s. what happened to 'go away garage'?

I don't know, he just up and closed the joint as far as I know.

Phil I think the engine will be easy to get running. The tires look to be a standard front tractor tire. I hope you can weld those rims will be your head ache. I see a lot of cut splice and grinding there. Did Grandpa get fed that night?

Do the same with the wheels as I suggest you do with the engine. Don't even try to fix them. Just find some used, cheap wheel/tire combo that you can make work, even if it means modifying or replacing the hubs.

The wheels are shot.
You know, I think maybe Grandpa had to hit Dairy Queen on his way to work that day, he worked Swingshift too.
Lol!

Yeah, I'm not having any luck finding any online. I'll come up with something. No hurry, the first thing I have to do is figure out how to get it out of the back of my rig. The guy I bought it from had it in his garage and used an electric winch to set it in there with. The little thing is way heavier than it looks.

might try adapting rim and tires from a boat trailer

good luck driving your wife crazy while entertaining the neighbors

tie with rope rear of it to a tree

Scrll through here. Maybe you can by tires and wheels and make a hub adapter

I would have loved and been honored to meet your grandfather Sir.

As for the walking tractor, I'm trying to find one for myself.

Good story... I can picture my Mom's folks in a similar row, but instead of Ozark hillbillies, no-nonsense Kansas flatlanders, and instead of a rolling pin, I picture Grandma brandishing cast iron cookware...

Busy as hell, but I can spot a good storyteller... gonna be back to dig a little deeper in your archives. Keep writing.