I'd be tellin' this little shit that he is staying outside until he comes back without the snake. 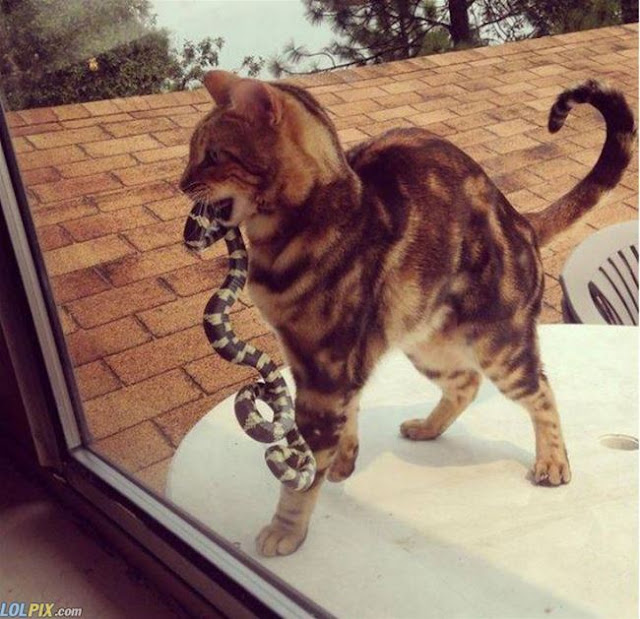 That picture reminds me of my Grandmother.
Granny was a large woman and she was from Missouri.Salt of the earth and a wonderful woman who I miss to this day even though she has been gone for over 35 years. I haven't had a decent meal since.

She had a garden every year and canned all Summer long. There was usually a short handled hoe leaning against the wall by the front door she would grab on her way out to the garden.
Her and Grandpa had a dog and a cat of course. The cat was pretty much an outside cat but would come in the back room to eat and once in a while come in and lounge around a bit. Granny always made sure the cat had food but never paid much attention to it other than that.


I'll never forget this as long as I live. I think I was about fifteen years old at the time.


The couch in Granny's house was just inside the front door and was situated so she could watch the television in the far corner.
I was sitting at the kitchen table one really nice afternoon and Granny had the screen door propped open for some reason.
I wasn't paying too much attention at first but all of a sudden I hear this shreek and she jumps up off the couch and started flailing around with one hand out the door trying to grab the hoe, gets a hold of it then bends down and picks the end of the couch clear up to eyeball level with the other hand!

By the way, that was a Hideaway couch with the mattress and all in it.

The next thing I know, she is wailing away with the hoe on something just out of my eyesight because there is a damn steel shelf unit in between us but she is damn well trying to kill something because I could hear the WHAM WHAM WHAM of the hoe hitting the floor and see the blur of her arm.

I jumped up and ran over to see what the hell it was and tripped over the cat who was running for it's life but had got caught between her and the wood stove for a second.
Next thing I know, she kinda scoops something towards the door and just drops the damn couch all at once. Another huge WHAM! This whole deal lasted less than ten seconds.
Her eyes were as wide as saucers and her face was beet red and there was death on her face boy.I never seen that look on Granny's face before.

Scared half to death and mad as hell all at the same time. She had been sitting there watching television when the cat came in the door and dropped a snake right on her foot. Of course it slithered right under the couch.
It was still alive at that point but Granny took care of that shit right now I'm tellin' ya.
She was scared to death of snakes and it was kill or be killed in her mind.
She had chopped that poor little Garter snake into pieces with that hoe, tore the shit out of the carpet too.
Needless to say the cat wasn't welcome in the house after that.
I was pretty damned impressed with that snatching up the couch shit, that sonofabitch was heavy I'm tellin' ya but she had a jolt of adrenaline going that probably would have killed someone half her size.

cats like sharing food they caught with their tribe

so the next time kitty licks your hand is it tasting its next dinner?

The cat likes dead mice and wants to share the dead mice with you.

You don't like the dead mice. Cleaning up the dead mice is more work for you and they bring no value to your life. But the cat likes dead mice, is proud of the dead mice that it catches, and wants to share these dead things with you.

When I was still pretty laid up and gimpy last year. I was just casually sitting in the old lazy boy reading a book. Out of the corner of my eye I caught movement on the living room floor....by damn there was a couple foot long rat snake slithering across the. Carpet ! At the time, I was still on crutches too. Know this though...crutches make a fine beating implement ! Always wondered how the damn snake made it into the house....until your cat story, seeing how we got a couple of em in and out all the time.
One of em is always catching and eating snakes too. Always wondered tho, the time we found half of a Coral snake on the porch, lucky kitty I guess....