Quote Of A Lifetime

I saw this over at Ye Old Woodpile Report, Remus is a weekly must read.

It is a little snippet form an article at AllOutdoor opining why hoarding gold and other tangibles isn't such a great idea if you don't have actual food available during the ongoing financial collapse, as the people of Venezuela can attest to.

I have seen this said before but for some reason it really hit me between the eyes this time and I want to emphasize this because we are in the beginning stages of collapse right this very minute, most people just don't know it yet.

People are shooting each other in the streets over food–not ammo, cigarettes, liquor, gold coins, silver coins, or any of the other crap that preppers love to stockpile “for barter when TSHTF.” That’s right, it turns out that good old-fashioned food is the only thing that you can actually eat in a collapse, and as worthless as the Venezuelan bolivar is right now, “sound money” is pretty much totally absent from all the discussions I’ve read of what the average Venezuelan is desperately worried about scoring when he wakes up every morning.


I highlighted that part because that is what smacked me in the face and got my attention.

Like most Americans I have pretty much fucked this off.
I have had long term food stored away in the past but either gave it away or threw it out while moving and downsizing after getting married.

It's not that I don't have any at all but it is woefully inadequate for my taste and something that has been bothering me for a very long time.
I can not, for the life of me, get my wife on board with this, she is the poster child for Normalcy Bias.

So it is going to be up to me to get serious about this. The amount of information to help with this can be overwhelming to the beginner but I have a bit of experience and the advantage of having grown up around my Grandparents, who lived through the Great Depression.

My wife freaks out whenever I bring this up and then inevitably swears her and the kids won't eat any of the stuff.
I'm here to tell her and anyone else who reads this one thing;

When you get hungry enough, you will eat anything.

Just ask anyone who has lived through a famine and they will tell you stories that will make your eyes water.


There may be some digestive issues at first but your body will get used to it very quickly.


There is no questioning the fact that we have never really recovered from the "recession" that hit in 2008 no matter how many lies our government tries to foist on us with their bogus statistics, reports and MSM cheerleading.


Venezuela is the canary in the coal mine here and although their current economic woes are to be directly blamed on their political leadership in the past, it is inevitable that the world economy is going to follow suit.
Whether by evil intent or extreme incompetence matters not, the results are going to be the same. 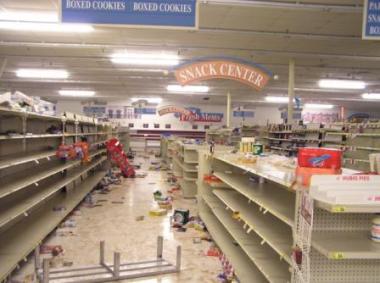 For those who will come around wringing their hands and pooh poohing that I am just another conspiracy theorist and that I am not helping the situation by expressing these views I can only say one thing.

You have been warned.

I posted almost the same article last night. My wife has voiced her concerns and wants us to increase our food stores. Right now 100 lb. Of flour is about 25$ at Sam's Club. My wife has never wanted to be involved till now in what we have stored.

I read your post earlier.
I wish my wife would have a Come to Jesus moment like that.

I think,or at least assume,that most of the preppers say to get food and ammo first,then use gold,silver,etc,as a way to preserve wealth after its all over.The problem is,how long will SHTF last?Junk silver and nickels won't buy a darn thing if it outlasts you!

One of the best things to do is buy a quality pressure canner,some extra lid seals and pressure release seals,and learn how to use it.
You are able to can meat with a pressure canner,also soups and sauces,and vegetables that can't safely be canned in a water bath canner-(green beans and other low acid vegetables), plus the pressure caner can be used as a water bath canner for canning tomatoes,etc.
It helps if you can grow a lot of vegetables yourself,helps even more if you have fruit trees so you can make jellies,jams,apple butter,pie fillings,etc.
Also allows to to can venison,rabbit,grouse,pheasant,squirrel,etc.
Beans,pastas and rice just ain't gonna get you very far-you need the nutrition from meats,fish,fruits and veggies to go with the dry goods.

It really is a sad affair when your wife cannot see the writing on the wall.

while you have a lot of great ideas,some cannot be implemented everywhere.I live in Az,not a lot of water for gardening,but I've had a few nice years.Other than pidgeons or snakes,not much to hunt.Fruit tree's galore,but they only come around once a year,and everyone will swipe them before you know it.

please have a store of 'beano' and other digestive enzymes onhand. will make the transition easier. start having hoppin joh nor similar at least once per week now to help the digestion acclimate.
also, lots of herbs spices, dried citrus and citrus peel to liven the rice and beans. also, canned butter [see 'ask jackie' at backwoods home magazine for the ways to can your own butter], lard,and vinegars--which can also be homemade but usually not strong enough to make safe pickles. buy commercial vinegar for pickling safely. these make things tasty. oh, and soy sauce, too.

get LOTS of extra lids and read how to store them.
i got my canning jars when a friend broke up housekeeping and gave me hers. look for friends in the same position and then you can share with them as payment for their kindness.

One of the best and cheapest sources of calories is good old fashioned No.5 yellow field corn. You do need to Nixtamalize(https://en.wikipedia.org/wiki/Nixtamalization) dent corns to remove the inedible pericarp and to unlock the Vb3(Niacin) to prevent developing pellegra.

We have been consuming nixtamalized corn in the form of corn chips, tortilla's, taco shells and so forth, but when a 50 pound bag of yellow corn is selling for around $7.00(Rural King/Tractor Supply) with approximately 2,000 calories per pound, you can very easily see why this is your cheapest source of survival carbs.

As a word of warning, always check the tag attached to the bag that denotes the basic info that will include any antibiotics that have been applied to the corn.

DON'T FORGET THE KETCHUP FOR YOUR DOG FOOD

MAKES IT EASIER TO CONSUME AFTER YOU ATE YOUR DOG

First, wheat, corn, oats, beans then rice ! All very cheap and long storage food.
Make sure to get a decent grinder and a cheap back up one too.
A few Conibear 110 traps will provide the little bit of meat you actually need.
Basic staples are so damn cheap that I cannot believe everyone doesn't have at least a years worth stored up ! Just make certain that it's put in mylar and buckets ! Or the bugs will eat well ! Preferably with oxygen absorbers too.

First, wheat, corn, oats, beans then rice ! All very cheap and long storage food.
Make sure to get a decent grinder and a cheap back up one too.
A few Conibear 110 traps will provide the little bit of meat you actually need.
Basic staples are so damn cheap that I cannot believe everyone doesn't have at least a years worth stored up ! Just make certain that it's put in mylar and buckets ! Or the bugs will eat well ! Preferably with oxygen absorbers too.

most can't process "the basics" anymore

and cooking "the basics" is a lost art

you can give good advice till the frogs boil

but many out there will wait until it hits hard

Good advice Spud and good to see you around again!