I laughed out loud when I saw this.
The fucking kid is brilliant.
Makes me wonder if he has an Uncle named Otter by any chance? 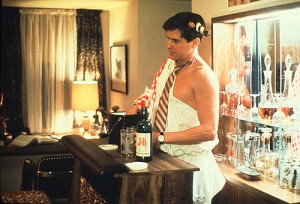 
GLENDALE, Wis. —Nicolet High School administrators alerted parents Wednesday to what they called a “derogatory and offensive demonstration” involving a Confederate flag inside a classroom.

Parents said a student showed up to school with the flag and announced during an English class that it was white privilege day.

Police were called to the school, and the student was suspended.

“This action disrupted the class and upset many students. While district policy allows for students to initiate conversation about a controversial issue, it must be presented in the ordinary course of classroom instruction and cannot be disruptive to the educational setting. The student's actions were a clear violation of this policy,” Kabara’s statement read in part.

“I think it’s a really terrible thing to happen for our school,” McBride said. “I don’t think it’s an accurate representation of the student body at Nicolet.”

She said the student should have exercised better judgment.

“The student should have known better,” McBride said.

Kabara said the incident has been taken seriously by school administrators and is under investigation. School personnel are being made available for students to talk with about the incident, he said.

That's how you say Fuck You to some SJW's now. Rub their faces in the very bullshit they spread.

Of course the entire school freaked out, they suspended his ass and now a bunch of the pussy motherfuckers have been traumatized.

The kid is officially on a Watch list now !!!! welcome to the club kid .

"...and now a bunch of the pussy motherfuckers have been traumatized."

your killin me Phil. That's hilarious.

HOPEFULLY THIS BECOMES A FAD!

Good for the kid! I hope this gets more common. There needs to be a huge backlash against the safespace harpies.