Is Hillary Going To Skate On The Email Investigation?

Would anyone be surprised if she did?
I sure as hell wouldn't be.


Officials: Scant evidence that Clinton had malicious intent in handling of emails

Prosecutors and FBI agents investigating Hillary Clinton’s use of a personal email server have so far found scant evidence that the leading Democratic presidential candidate intended to break classification rules, though they are still probing the case aggressively with an eye on interviewing Clinton herself, according to U.S. officials familiar with the matter.

FBI agents on the case have been joined by federal prosecutors from the same office that successfully prosecuted 9/11 conspirator Zacarias Moussaoui — and who would handle any Edward Snowden case, should he ever return to the country, according to the U.S. officials familiar with the matter. And in recent weeks, prosecutors from the U.S. Attorney’s Office in the Eastern District of Virginia and their FBI counterparts have been interviewing top Clinton aides as they seek to bring the case to a close.

CNN reported Thursday that longtime Clinton aide Huma Abedin was among those interviewed. A lawyer for Abedin did not immediately return an email seeking comment.

The involvement of the U.S. Attorney’s Office is not indicative that charges are imminent or even likely. One official said prosecutors are wrestling with the question of whether Clinton intended to violate the rules, and so far, the evidence seemed to indicate she did not.

How many times have I seen in the last three or four months that there were multiple instances of Classified, Top Secret and Beyond Top Secret emails found on her server?

But there's no intent there so she is free to go?

That's exactly what this article is trying to say.

There's just that little part in there saying that Federal Prosecutors have now joined the FBI in this investigation.

That doesn't sound to me like anyone is just going to skate.

So what's it gonna be here fellas?

You know damn good and well I would love to see that woman squirming in her chair under cross examination.

A nice Frog March out of the courtroom in handcuffs would be the cherry on top.

It's hard to say at this point, the FEEBs have their asses on the line here and they know it.

They are holding their cards pretty close to their vest at this point because like someone recently said, You only get one shot at The Queen.

I hope they make that shot count. 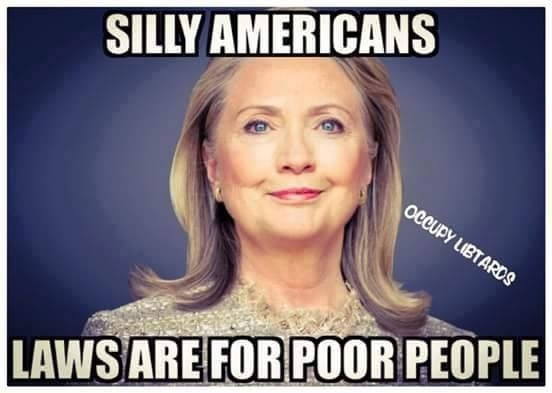 So if I didn't INTEND to run you over with my car while texting, and you are killed, does that let me skate?

If I didn't INTEND to skip paying some taxes, but rather overlooked that debt, does the IRS say that I can skip jail time and loss of assets?

may she hit thin ice on her skates

Intent is irrelevant as far as the law goes. ALL that matters is what she did.....intentional or not. I suspect that the investigators have been quietly
taken aside and told EXACTLY what will happen to them if they don't make this issue go away. The FBI works for the Just Us department. That means they work for Obama's bitch Loretta 'lil Holder' Lynch. As long as the DNC and commies control the White House NO demonrat will EVER be held to account for crimes they commit.

If you or I had committed these same CRIMES, we'd already be in the slammer.