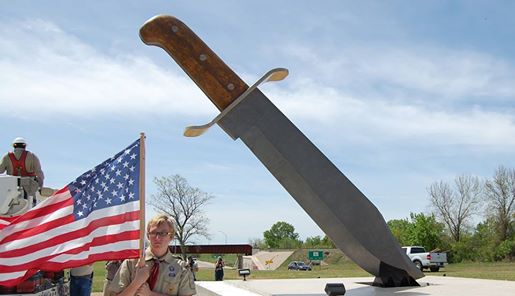 The town of Bowie, Texas, which -- like the knife -- was named after Alamo defender Jim Bowie, unveiled the 20-foot-long, 3,000-pound, stainless steel knife on Thursday.

"For Bowie, we are hoping to get people off of the highway and into town," Diana Thomlinson, executive director of the Bowie Chamber of Commerce, told KFDX 3. "We want them to spend their money of course, but we want them to see there is so much to do and see in Bowie.

Thomlinson also said that the knife was funded using private funds. It will be dedicated to Bowie in a ceremony in June, with plans to submit it for consideration in the Guinness World Records.

"It will be a record," she said. "We're intending to have [officials for Guinness World Records] at our dedication ceremony."

Ryan is not impressed.

Ryan is not impressed.