Umm, Yeah, I Think I Might Have Over Done It A Bit

That list of shit that needs to get done isn't getting any shorter and I am the fucking guy who has to get it done.

So, I dragged my ass out in that disaster area some people call a garage and started in.
If you think I'm kidding, see for yourself.
This is pretty much what it looked like after we got done throwing shit in there when we moved. 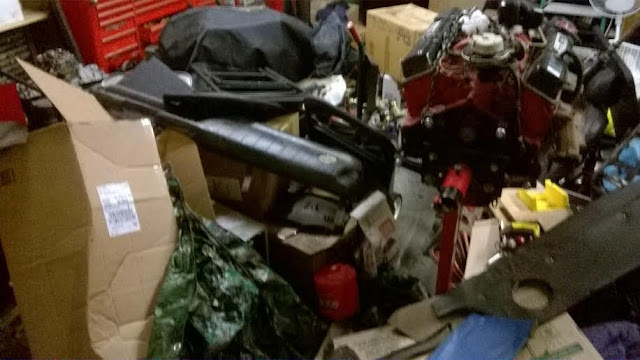 Somehow, I need to make a hole big enough in that fucking mess to park a small car that has no roof on it so it doesn't get full of water anymore.

So I started rearranging shit on a shelf that is on one wall to start, then stacked a bunch of boxes on it to make just enough room to turn sideways in. 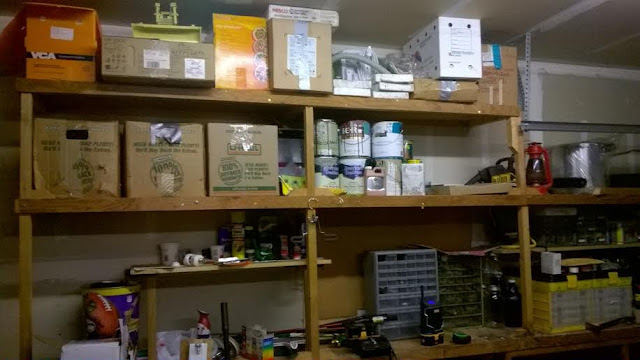 Of course this involved getting a ladder in there too.

Then the big project. I have had this heavy duty wooden shelving unit I have drug all over two counties for the last twenty five years that I have found comes in real handy for storing shit in.

I got to eyeballing this shelf on the wall and my unit and then got out the tape measure. Mine is 41 and1/4 inches high and a full 8 feet long.
The shelf on the wall has sagged in the middle but I'm thinking with a little upward pressure, take out a couple of too short as it is supports and I can slide my unit right under that fucker and get it the hell out of the middle of the doorway and use it for wasted space underneath the wall unit.

Away I go.
First off is to move a whole bunch of heavy shit away from the wall, naturally. 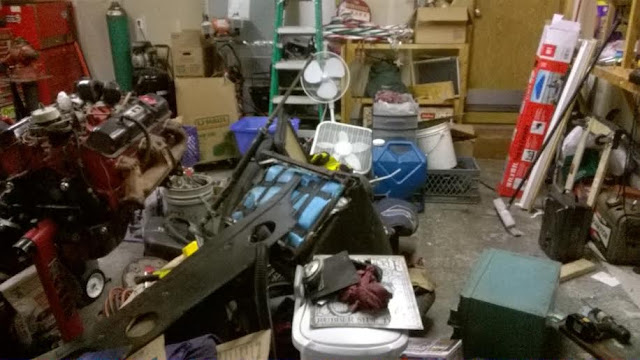 Then I had to take the back board I had put on it at the other place to keep shit from rolling off onto the floor behind it off. 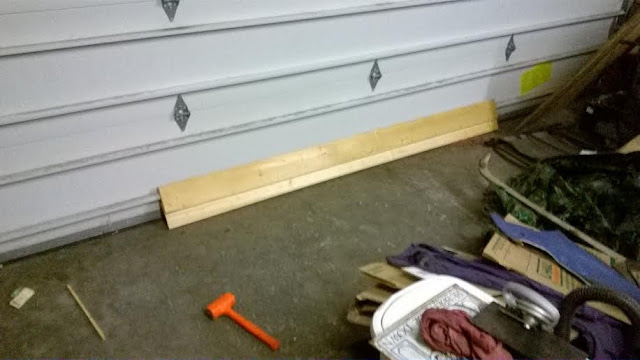 You can tell that's where the shelving unit was, right in front of the fucking door. It was the last thing off the truck.

Then I got the little floor jack out and cranked the wall unit up until I started hearing cracking noises. That generally tells you that you are getting almost where you want to be. 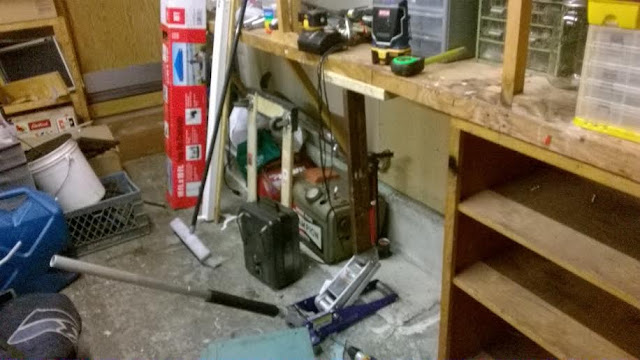 Then it was Heave Ho and drag the heavy bastard around and push it up and under the wall unit. 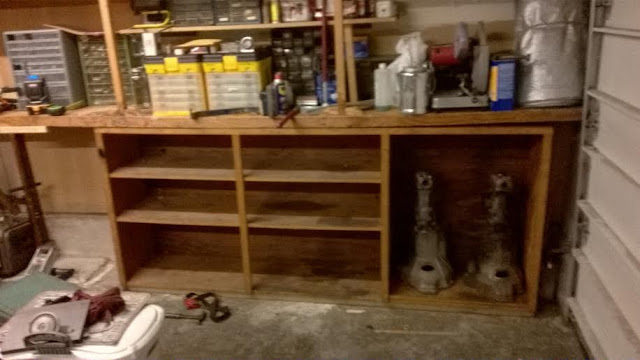 I had to knock a shelf out and pull the nails to make room for the little transmissions. $1500 apiece for rebuilt ones, now you know why I am saving the motherfuckers.
As you can see, the wall unit has sagged even with the braces that were under it, one of which I have put back. I am going to have to shim the shit out of it to make it level. 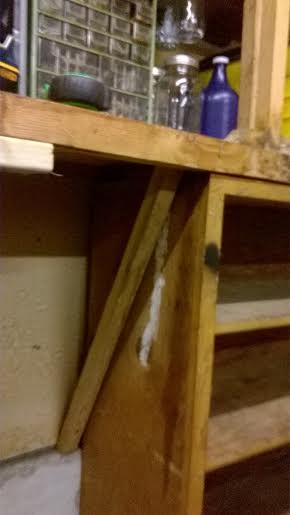 I got all that done and turned around to grab a bolt bin to slide back onto the bottom shelf when all of a sudden I got real light headed to the point everything went white for a few seconds and I had to grab something to keep from falling over.

I knew I was pushing it, I had started sweating about twenty minutes into this little project and not a healthy kind of sweat.
More like a icky, sticky, you are still sick you stupid sonofabitch and pushing it too hard kind of sweat.

So I grabbed a coke and came in and took a break for a bit before I went back out and snapped the pictures.

I gotta get this shit done and I am going to, period.
I just need to realize that even though the mind is willing, the flesh is weak.

It isn't totally because I haven't been feeling good either, I have noticed lately that I just don't have the fucking stamina that I used to and every time that hits me, I stop and realize that I'm not a fucking kid anymore. I'm 56 years old now and the reality of that is I just can't do as much as I used to, stubborn motherfucker or not.

This immediately causes me to want to double down because I have always been an independent bastard, I hate not being able to do shit I think I should be able to, or used to do.

That kind of stubborn ain't good though, so I have to make myself stop and go take a fucking break.

Such is life. It beats the alternative.

So I'll be back out there in a little bit, after I take a bit more of a break. I already see that I'm not going to get as much done as I want but so fucking be it.

Before I work too damn hard again, I am going to make myself stop, go in and take a shower to get the Ick off me and then get something to eat. I might even take a nap later.

Just remember though, you fucking punks better stay off my lawn, dammit.

Keep on keepin on bro

Double up on that water intake.

and dont forget to get you ticker checked.

must be alive again

The principle of garage organization is to separate the tools from the parts from the supplies. Mark