It was one of THOSE days again

Fuck me runnin', what a fucking day.

My boy called me yesterday and asked if I wanted to trade some work, he is an apprentice electrician and I told him I wanted a heavier breaker in the garage for my welder and another fucking outlet a while back.
He says to me that his belt started squealing and he was losing coolant from underneath on his Pick Up.

So he needs the rig to get to work and it's a jacked up 2002 Dodge Ram 4X4 so of course the damn thing won't go in the garage and be able to open the hood.

He gets here and I take one look and bigger than shit it's the water pump. I ran down to NAPA and snagged a new one.
Gas motor, the venerable old Dodge 360. That would be a 5.9 liter engine to all you youngsters out there.
When I called him this morning to tell him I was up and to come over, I peeked outside to see what the fucking weather was doing.
Nice and dry if a bit chilly but no fucking rain so I said Cool!

He gets here, opens the hood and I have him pull up until the hood is about two inches from the gutter over the garage and it starts to sprinkle.
Yay.
I should be able to stay somewhat dry though.
He starts in on the breaker panel while the truck cools off and it doesn't take long to figure out the breaker I had wouldn't fit so off to Home Fucking Depot we go. Along the way, this slight drizzle has now started to turn to sleet.

We find what we need,stop and grab something to cram down for lunch and now it is spitting snow.

He finishes up installing and wiring a new outlet and putting the breaker in while I start draining the coolant on the truck.

Now it is flat out snowing and colder than a witches tit in a brass bra.

We fiddle fucked around and had to fight the By Pass hose that peeks out from under the fucking air conditioning compressor and start putting it all back together,.
That hose however, is fighting me. There is only about an inch of it poking out and I am trying to wiggle the water pump up into it while holding it and a couple of bolts I had in to hold the fucking gasket.
It's kind of blurry but you can see what I am talking about here, I wasn't pulling that A/C compressor for love nor money if I could avoid it. 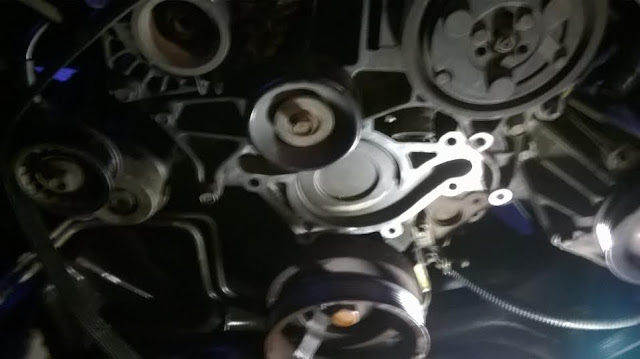 Now I have been to Grandma's house before and used some Stick Um to try and hold that gasket onto the pump but this fucking hose is so tight up in there that I am having a hard time getting the nipple to slide in and not scrape the gasket off while pushing the pump up into the hose and line up the bolt holes at the same time.
I finally get the motherfucker up in there and start putting the long assed bolts back in to start tightening everything down but I am having trouble with two of them on the bottom.They do not want to start.

I finally ran them in with the air ratchet and finished putting the whole thing back together.
My mistake there.

He filled it with coolant and water then fired it up.
This whole time it is just colder than shit and snowing off and on.

Bigger than shit, he fires it up and coolant starts pouring out the bottom.

The fucking gasket had slipped after all.

So we tear the dirty sonofabitch back apart in record time and the gasket is fucked.

Not being one to admit defeat easily, I grabbed a can of my Secret Weapon. 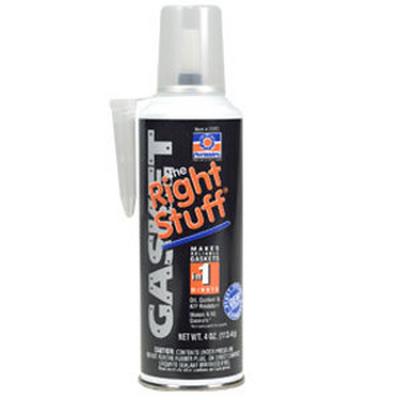 Fuck that gasket, with this shit you don't need one. Far and away it is the best silicone type sealer I have ever come across. It's so damn cold that it doesn't want to come out of the can but I finally got enough on me and the pump that I called it good and put that fucker back up in there.
Not having to fight the gasket was the ticket.
I tightened the damn thing down, put everything back together except the fan and shroud and went in the fucking house to warm up my freezing hands for a while to give the sealer time to set up a bit.

About forty five minutes later we went back out there and put coolant back in it and fired it up.

Now it's dark and snowing like a bastard but not quite sticking to anything.

No leaks this time, pulled the top radiator hose off, put the fan and the shroud on and fired it back up.

For you do it yourselfers, the fan is one of those that threads on that they want you to buy some special tools to hold shit while you screw it off. Fuck that noise, get an air chisel with a really long bit, figure out if it's Left or Right hand thread because I have seen both and give that fucker a good Rat-A-Tat Tat on the edge of the nut in the direction you want it to turn. It will come right loose. Then it just spins right off.

You want to talk about a cold blooded sonofabitch of an engine though. That fucker ran for a good fifteen minutes before the thermostat even thought about opening up.
It finally opened up enough that I could feel the top hose getting hot, checked for leaks again and buttoned the bitch up
.
What a fucking ordeal for something that shouldn't have taken an hour and a half tops.
Now I remember why I quit working on cars for a living.

It's done though, the kid can get to work OK and now I can use the little wire feed welder that I bought a year and a half ago.

I has some little projects I want to get done and have been putting them off ever since.

I have replaced that water two times myself

Although the first words that just came to mind were Homicidal Maniac I feel certain that no jury of your true peers would ever convict you.

You must be right, I know it said 5.9 because I looked at it twice. It is set up the same as an old 318 though and because I have worked on so many of them it stuck in my head.

It would have been a pretty easy one if the thing hadn't been jacked up so high and it wasn't freezing fucking cold outside.

Same deal with the water pump. Major PITA to swap out because of the hose you fought.