Where In The Hell Is My "UNLIKE" Button!

One of the more productive things I could think of to do with what's going on these days it ain't. 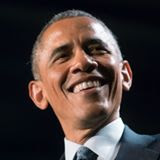 Public Figure · 672,533 Likes
· 19 hrs ·
Hello, Facebook! I finally got my very own page. I hope you’ll think of this as a place where we can have real conversations about the most important issues facing our country – a place where you can hear directly from me, and share your own thoughts and stories. (You can expect some just-for-fun stuff, too.)
I’m kicking it off by inviting you to take a walk with me in my backyard – something I try to do at the end of the day before I head in for dinner. I say this often, but...
See More
143,538 Likes · 31,421 Comments · 31,233 Shares

"Hello, Facebook! I finally got my very own page."
That's the top of the first post written by one of Facebook's newest users — a man who identifies himself as a "dad, husband," and, oh yeah, "44th President of the United States."
President Obama finally has his very own Facebook page: facebook.com/potus.
That's not to say Obama hasn't had a heavy Facebook presence for years. His 2008 campaign was the first to aggressively use social media to woo and organize supporters, and there's been a White House page for a while.

Narcissistic bastard.
He probably reads the comments telling him how great he is to help him sleep at night.

One thing I did notice about this, read it somewhere, is that comments and messages posted to his page will be archived according to the presidential records act.

Aw - don't be hating on our Chief Executive. His latest honor - being named a gay ally by Out magazine. I know - major shock, right ?

There is only one thing to say about Mullah Obama's Facebook page - big fucking deal!