Sure, We Can Help Turkey Secure Their Border With Syria But Can't Secure Our Own

This pretty much proves that the current administration is purposely allowing our country to be overrun with illegal immigrants.


U.S. Working With Turkey to Cut Off ISIS Smuggling Route

Entire border of northern Syria to be shut, Secretary of State Kerry says; operation could be a game-changer, diplomats say.


REUTERS - U.S. Secretary of State John Kerry said on Tuesday the United States is starting an operation with Turkey to finish securing the northern Syrian border, an area that Islamic State militants have used as a lucrative smuggling route.

"The entire border of northern Syria - 75 percent of it has now been shut off. And we are entering an operation with the Turks to shut off the other remaining 98 km (61 miles)," he said in an interview with CNN. 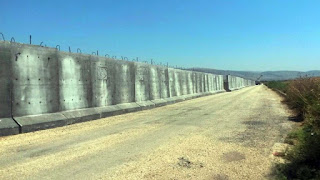 That could be Texas, Arizona or California next week if they were even the least bit serious about our National Security.

That they aren't is patently obvious.

That they are helping Turkey do this shows that American Hegemony is more important than the security of the very borders that define this country as a place.
The hypocrisy of this is stunning when you think about it.