Couple this news with the recent announcement that Kerry signed that damned U.N. small Arms Treaty and you might start seeing the Larger Picture here.
Here is one these clowns may want to remember, 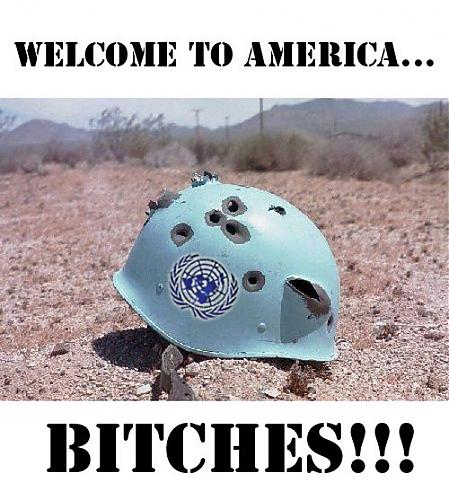 On Wednesday, Attorney General Loretta Lynch announced at the United Nations that her office would be working in several American cities to form what she called the Strong Cities Network (SCN), a law enforcement initiative that would encompass the globe.

This amounts to nothing less than the overriding of American laws, up to and including the United States Constitution, in favor of United Nations laws that would henceforth be implemented in the United States itself – without any consultation of Congress at all.

The United Nations is a sharia-compliant world body, and Obama, speaking there just days ago, insisted that “violent extremism” is not exclusive to Islam (which it is). Obama is redefining jihad terror to include everyone but the jihadists. So will the UN, driven largely by the sharia-enforcing Organization of Islamic Cooperation (OIC) and the pro-Islamic post-American President Obama, use a “global police force” to crush counter-jihad forces?

After all, with Obama knowingly aiding al-Qaeda forces in Syria, how likely is it that he will use his “global police force” against actual Islamic jihadists? I suspect that instead, this global police force will be used to impose the blasphemy laws under the sharia (Islamic law), and to silence all criticism of Islam for the President who proclaimed that “the future must not belong to those who slander the prophet of Islam.”

What is a global police force doing in our cities? This is exactly the abdication of American sovereignty that I warned about in my book, The Post-American Presidency: The Obama Administration’s War on America. The Obama Department of Justice made it clear that it was exactly that when it distributed a press release last week announcing the “Launch of Strong Cities Network to Strengthen Community Resilience Against Violent Extremism.” In that press release, the DoJ complained that “while many cities and local authorities are developing innovative responses to address this challenge, no systematic efforts are in place to share experiences, pool resources and build a community of cities to inspire local action on a global scale.”


So if the local and municipal effort to counter the euphemistic and disingenuous “violent extremism” is inadequate and hasn’t developed “systematic efforts are in place to share experiences, pool resources and build a community of cities to inspire local action on a global scale,” the feds – and the UN – have to step in. Thus the groundwork is being laid for federal and international interference down to the local level. “The Strong Cities Network,” Lynch declared, “will serve as a vital tool to strengthen capacity-building and improve collaboration” – i.e., local dependence on federal and international authorities.

Lynch made the global (that is, United Nations) involvement clear when she added: “As we continue to counter a range of domestic and global terror threats, this innovative platform will enable cities to learn from one another, to develop best practices and to build social cohesion and community resilience here at home and around the world.”

It's not bad enough that local police departments have been getting more and more militarized over the years and that they rely on Federal largess much too often, now they want to bring in a World Police.

Bring your shit on boys.
we'll show you a time you will never forget.

Once again, Obama is coddling these Islamic jihadists and trying to overblow the threat of Domestic Terrorism.
Once again also,he is going to step on his dick.

For the life of me I can not comprehend the fact that he thinks bringing U.N. troops into this country is going to do a fucking thing except piss off damn near everyone already here in the country with the most heavily armed populace on the entire planet.

Signing that small arms treaty is joke to begin with, bringing in the Blue hats is going to be hilarious.

The treaty was signed back in 2013 and I haven't noticed any shortage of guns since then. So, uhm, when are the UN blue helmets gonna show up? I mean, weren't they supposed to show up and take all our guns during Jade Helm? But Jade Helm is over! Huh. Go figure. As for the rest I did a quick Google and you got all this from Breitbart. For real? You're actually believing anything published by that rag? You haven't learned from the first ten err twenty err forty err hundred times that they were caught, like, *making shit up*? You got better sources than Breitbart? 'Cause they're less reputable than the National Enquirer. At least the National Enquirer was right about John Edwards's love child, which makes them, like, 1,000,000 times more accurate than Brietbart...

As for that "Strong Cities" thing, the Muslim community is pretty confident that it's targetted at them. At least, they're threatening to sue New York City for joining it, saying that it's going to target Muslims and erode their civil rights as Americans, 'cause that's how the NYPD rolls, yo. Although I have to point out that most of the terrorist attacks on American soil this year were committed by, err, non-Muslims. With the exception of those two asshats who tried to ventilate Pam "Atlas Jugs" Geller's little conference of bad cartoonists, who got themselves ventilated long before getting off a shot at anybody.

Frankly, I know who's trying to take away my freedoms, and they're doing it with a fountain pen, not with blue hats.

You know BadTux is an egg sucking liberal, right?

NONE of this works without "gun control".