Someone had it in for this guy, someone in the right place to make this prosecution happen.
I say this because they went after him and he wasn't able to dodge it by pulling strings. Kind of unusual in D.C. for someone as powerful as he once was.

Watch him walk away with a slap on his limp wrist though. 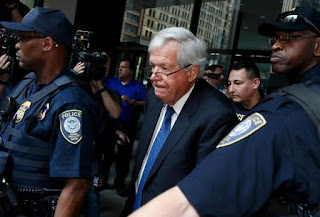 Federal prosecutors allege he promised to pay $3.5 million to an unnamed individual from his hometown of Yorkville, Illinois, to conceal past misconduct.
The individual who was allegedly receiving hush money from Hastert has not surfaced publicly. But anonymous law enforcement officials have told several media outlets that Hastert was trying to cover up sexual abuse of a male decades ago when he worked as a high school teacher and wrestling coach.
Hastert has not been charged with any past misconduct. He was a teacher at Yorkville High School in the 1960s and 1970s.
Lawyers for both sides said in September they were negotiating a plea deal to keep the case from going to trial. Durkin had asked both sides to bring him an agreement this week, or he would set a trial date.
According to the indictment, Hastert withdrew $1.7 million in cash from his bank accounts from 2010 to 2014. He is charged with "structuring" $952,000 of the withdrawals, taking the funds out in increments of under $10,000 to evade a requirement that banks report large cash transactions.
Hastert then told the FBI he was keeping the cash for himself, which the indictment said was a false statement.
Each of the charges carries a possible maximum sentence of five years in prison and a $250,000 fine.