"No Californians" stickers being slapped on Real Estate For Sale signs in Portland ORE.

They are thirty years too late is all I can say.

There used to be a joke among Oregonians saying they wanted to put up a sign at the California border informing Californians trying to move North that every third Californian was being shot ten miles inside the border and two just went through.

It looks like some locals are getting outbid trying to buy houses around here and they are sending a message.

Good luck with that, shit talks and money walks.
People are paying big money for houses in certain parts of Portland that used to be how shall I say, less than desirable. 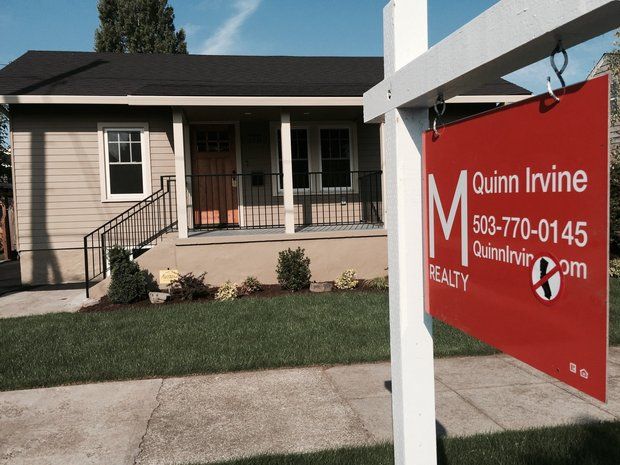 'No Californians' stickers being slapped on For Sale signs in Portland

By Luke Hammill | The Oregonian/OregonLive

Portlanders apparently upset with the direction of the local housing market are slapping "no Californians" stickers on For Sale signs in the city, real estate agents say.
When one of realtor Lori Fenwick's buyers sent her a picture of one of the stickers, she took it to a real estate group on Facebook to see if any other agents had seen them around town.

Courtesy of Lori Fenwick
Three other realtors replied they had. One of them was Quinn Irvine, of M Realty. Somebody plastered one of the stickers – showing a silhouette of California with a "No Smoking"-like red slash through it – on his sign outside a house on North Burrage Avenue.
"A lot of these homes are going into bidding wars and going over ask price," Irvine said. "And a lot of these guys are getting outbid. And I think they're going around to agents who have properties that have sold over ask price and putting anti-California stickers."
Fenwick, of Premiere Property Group, said somebody covered her name on one of her signs, replacing it with a phrase: "STOP THE BUBBLE." Both Fenwick's and Irvine's listings were in North Portland's Arbor Lodge neighborhood, they said.
"People think that our signs magically appear," Fenwick said. "But they don't. We pay money for them, and it's none of their business to be putting stickers on them."
Irvine eventually sold the house where the sticker appeared for $450,000 – to a man from New York, he said.
Fenwick said people upset with housing prices "can just go ahead and voice their opinions wherever they want, but it sucks that they're doing that."
She and Irvine acknowledged that they are dealing with a lot of out-of-state buyers, many of whom do come from California.
"I'm dealing with a couple of San Francisco buyers," Irvine said. "One guy's cash."
But both agreed that out-of-state buyers are coming from everywhere – not just south of the Oregon border.
"There's the lowest inventory we've had in over 10 years, and people are frustrated," Irvine said. "They're basically blaming Californians for raising their real estate prices."


They are absolutely fucking right too.
This isn't a new thing, it's been going on for twenty years that I know of and it is the entire Portland/Metro area, which is basically a twenty mile circle around Portland that includes South West Washington, the Vancouver area especially.

Want to buy a move in ready house for $30,000, or less? Move to northern NH. Property assessments in Berlin NH have just dropped by a lot.

Hope you don't need a job, however.

What part of NNH? Certainly not the Colebrook area where 100K + seems to be the norm and no jobs to boot!

I seem to remember some "Don't Californiacate Oregon" bumper stickers from one of the two previous bubbles.

Well, at least those ex-Californians are moving into another Liberal Paradise, rather than moving to a Conservative state like Texas.

Arizona.
Before my old man kicked the bucket my parents bought a place in Arizona, not too far from Lake Havasu I believe. Two bedroom house, covered RV pad, storage shed and an in ground pool, for thirty grand.

Some years back, there was a joke regarding the "move north and fuck up the area" group. It was a picture of the I-5 bridge over the Columbia River, with a billboard that had driving directions. The left lane was for residents, the center lane was for visitors, the right lane was for people from Kalifornia but this lane ended halfway across the bridge, so the cars would drop into the river.