Can't be pissing off the New Democrats now.

Amid pressure from Democrats worried about political backlash, President Obama will delay his promised executive actions to overhaul the immigration system until later this year, a White House official said Saturday.
The decision is a clear reversal from late June, when Obama, frustrated by congressional deadlock on the issue, vowed to use the power of his office to make changes at the end of the summer. White House officials had signaled that Obama was considering drastic changes that would allow millions of undocumented immigrants to temporarily avoid deportation.


But Democrats running in tough races in conservative-leaning states began to lobby the White House to delay the move until after the November midterm election. The pressure grew stronger after a wave of thousands of unaccompanied minor immigrants from Central America began arriving at the border, crowding detention centers and rocketing immigration into the headlines.
The White House official said Saturday that Obama still plans to use his authority to make “significant” changes to the system. Aides were worried that announcing those changes amid the campaign season would make the new program a target of political ads and a swarm of attacks.
“Because he wants to do this in a way that's sustainable and that's freer of the political environment we are currently in, the president will make his announcement before the end of the year,” the official said, speaking on condition of anonymity to discuss internal deliberations.
Obama hinted last week that he was considering a delay as a vigorous debate waged among his advisors about the politics of the move. Democratic senators and their aides began pressing the White House to consider how the announcement could scramble their tight races so soon before the election.

Here is a picture to help you identify The New Democrats. 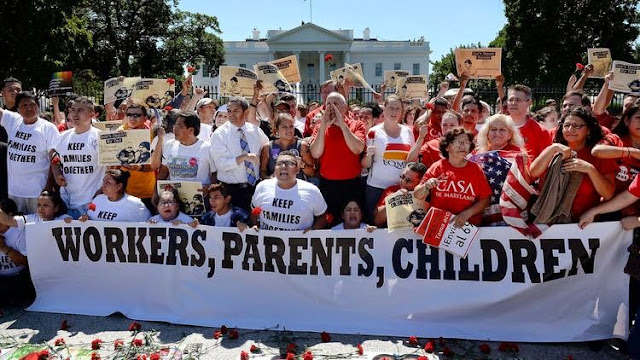 I have a suggestion to those wearing the T'shirts saying "Keep Families Together";

Get your undocumented asses back to Meheeco.
Problem solved.