I am going to wait for some facts and hopefully video before I really say too much about this. My condolences to the family of the late Mr. Ward.

I can't see Tony Stewart running anybody over on purpose right in front of God and a grandstand full of people no matter how mad he was.

I did manage to find a picture that bears a striking resemblance to a mug shot though. 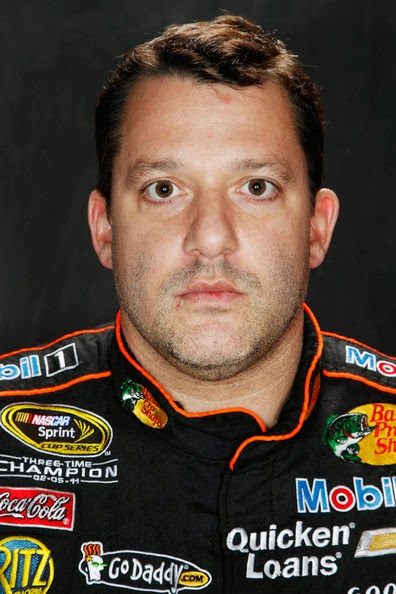 From the LA Times;

A race car driver was killed Saturday night when he was hit while on foot by NASCAR driver Tony Stewart during a Canandaigua Motorsports Park in New York.
Amateur video of the incident shows racer Kevin Ward Jr. stepping toward Stewart's car at the Lucas Oil SuperSprint feature race after he was spun-out. In a matter of moments,Stewart's car hits Ward, sending him flying through the air. People in the audience can be heard screaming in terror at the incident.

Ward was pronounced dead at F.F. Thompson Hospital at 11:15 p.m., according to the Ontario County Sheriff's Office.
The incident happened around 10:30 p.m. at the exit for turn 2 during lap 14 of the 25-lap event, according to the sheriff's office.
Stewart, 42, has been "fully cooperative" with the investigation, sheriff's officials said.
It is unclear if any charges will be filed.
This story will be updated as more information becomes available.

Update;
A good man, Irish forwarded the video to me so you can make your own decision.

sounds like he did a powerslide to roost the guy and got a wee bit too close.He is known for a short temper.Nothing will ever come of it.

Here's the vid, ( you have probably already seen it)

The one thing I can say for sure is walking out in the middle of the track when cars are flying by ain't a good decision.

Sure, Stewart is known for his temper but I still don't believe he would run the guy down on purpose.

Thanks for the link Irish, I updated the post and gave you credit and a link.