I Feel So Much Safer Now

Why does this not surprise me?

It's something most of most students learn in elementary school -- the United States is made up of 50 states and the District of Columbia. But Channel 9's Justin Gray found out it's a lesson that an Orlando agent with the Transportation Safety Administration seems to have missed.

Gray, who lives in Washington, D.C., was flying out of Orlando International Airport when a TSA agent said Gray's District of Columbia driver's license wasn't a valid form of identification. Gray said his license is legal and up-to-date, but the TSA agent didn't seem to know what the District of Columbia was when Gray arrived at the security checkpoint over the weekend.

When Gray handed the man his driver's license the agent demanded to see Gray's passport.
Grays told the agent he wasn't carrying his passport and asked why he needed it.

The agent said he didn't recognize the license.

Gray said he asked the agent if he knew what the District of Columbia is, and after a brief conversation Gray realized the man did not know.

Gray was able to get through security and then stopped to complain to a TSA supervisor.

Critics of the TSA said that what happened to Gray is a sign that the problems at TSA are bigger than just not knowing geography.

"They simply have not been either applying or maintaining standards for good personnel," said Douglas Kidd, with the National Association of Airline Passengers.

What is today's date?

I swear on my Mothers grave I won't even get within a country mile of an airport, let alone fly,unless it is some family emergency.

Yet this is what our fucking government considers good enough to give a security clearance to and the authority to make your life a living Hell because terrist's ya know.

It's for the children, or whatever horseshit excuse they decide is the buzzword of the day.

I see some of the employees of the TSA once in a while at a 7-11 I stop at and it is all I can do to not point and laugh.

I swear the stupid radiates off of them like heat waves when they waddle by on the way to the donut section. 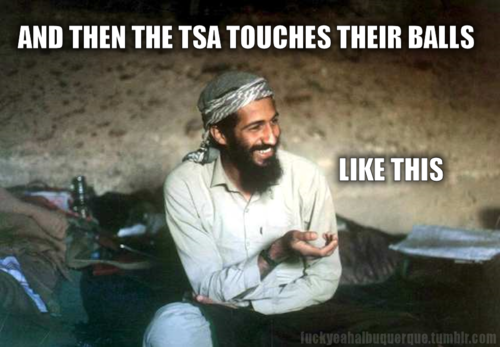 TSA doesn't need to be smart or educated since their whole job is pointless bureaucracy. Letting all Americans carry rocks and baseball bats onto planes and there won't be any hijacking. Al-quada may have made hijacking another plane impossible since with a stroke, they retrained the entire air traveling public to stop being sheep. Only the TSA expects sheep passengers now.

I have always maintained that to be hired by the TSA, one must have an I.Q. of 80 or less.

Not qualified to work at Wally-world, yet are in charge of our security. Jesus wept.

I'm with you, if I can't drive there, I don't need to go. If the future of the entire airline industry depended on me getting on a plane, they're fucked.

If there is any part of .Gov that needs to be fired with no unemployment benefits, it has got to be both ATF and TSA agents.

Don't forget the DHS also. And the EPA.

You know when you're driving in summer construction, and the orange cones and orange barrels go on for miles, but you don't see any workers? It's like that, but with more badges, more guns, and more guys named "Lemonjello" and "Derotisserie" who just finished doing ten years at Rahway for rape sticking guns in your face and demanding to see "your papers.".