A day late and ten dollars short, as usual.


An investigation of wait times for medical care at Veterans Affairs facilities has found "inappropriate scheduling practices are systemic" through the VA and "instances of manipulation of VA data that distort the legitimacy of reported waiting times," prompting new calls for VA Secretary Eric Shinseki to resign.
The VA inspector general's interim report, released Wednesday, shows the investigation has expanded to 42 facilities, more than a dozen beyond the previously reported 26.

At the Phoenix VA, the main subject of the interim report, investigators "substantiated that significant delays in access to care negatively impacted the quality of care," finding about 1,700 veterans who were waiting for an appointment but were not on a waiting list.
"These veterans were and continue to be at risk of being forgotten or lost," the report says, adding they may never obtain an appointment. 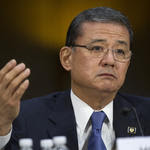 "A direct consequence of not appropriately placing veterans on EWLs (electronic waiting lists) is that the Phoenix HCS leadership significantly understated the time new patients waited for their primary care appointment in their FY 2013 performance appraisal accomplishments, which is one of the factors considered for awards and salary increases."
The report prompted Rep. Jeff Miller (R-Fla.), the chairman of the House Veterans Affairs Committee, to immediately call for Shinseki’s resignation.

If you ask me, the outright and blatant infiltration of communist bootlicking operatives into every facet of our lives is just about complete. I'm sure they've been rewarded heavily for their turning on their countrymen. When their time comes, I hope they hang high and in the wide open for everyone to see their lifeless bodies. I visit the Michael E. DeBakey VA Hospital in Houston at least once or twice a year for my check ups. I've not had any scheduling conflicts or anything else shady happen to me since I've been in the VA system for healthcare since my EAS from the USMC. What I will say is this: They absolutely try to get everyone who walks through those doors in for a Psych Eval so they can tell you that you have PTSD and go on medications out the wazoo. I don't have a PTSD problem, people have a shut the fuck up problem... I've refused every time they've scheduled me Psych appointments because I don't need it. I don't have anything wrong with me besides my hearing and back problems (both service related). I'm no Columbo, but I see where that pattern is headed. They want to classify every Vet as a head case so they cannot own firearms, DUHHHHHHHH!!. I'm not stupid. Those Docs are setup question specialists. I feel like I'm on trial when I'm there.

It's not just the VA either.
Every time I go for a check up the Doc wants to prescribe me anti depressants to help me quit smoking.

Guess what conclusion someone with access to my medical records would come to if they saw that?
It doesn't say anything about smoking on his prescriptions.


He is actually a pretty cool Dr., pony tail, blue jeans and plaid shirts. About 5 years older than I am.

Never any questions whether or not I own fire arms either.

I wouldn't answer them anyway, none of yer business.

You are correct in your theory though, they are deathly afraid of a bunch of pissed off Veterans with guns.

They should be, assholes.

Congress has held oodles of hearings on the VA. It'd be nice as a supposedly co-equal branch of government if they stopped holding fucking hearings and started to do something about it.

But no, those fuckers just want to grandstand and carp.