Something Special For Just An Earth Bound Misfit, I

I immediately thought of her when I saw this, she likes old trains and this one is like the Holy Grail of restoration projects.

We are talking MONSTER Locomotive here. But of course, I see she already knew about it over a week ago now that I posted this.

Oh well, I'm betting the rest of you didn't see it.

Big Boy coming through! Locomotive of the Union Pacific Railroad to be restored to its former glory 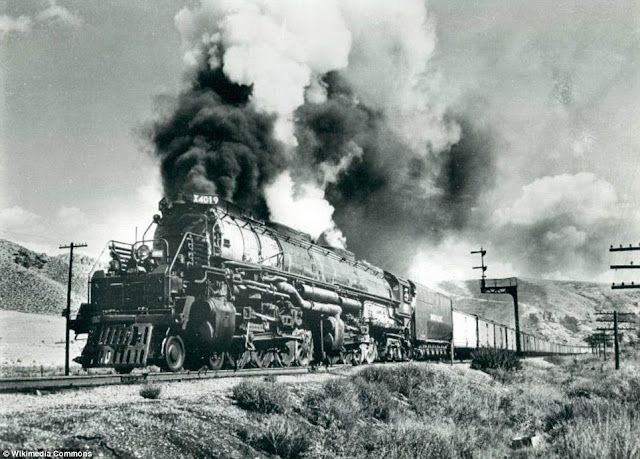 Even the name is legendary. An unknown worker scrawled 'Big Boy' on the front of one of the engines when it was under construction.

'It came out one day, and it had "Big Boy" in chalk on it. And from that day forward, it was Big Boy,' said Ed Dickens Jr., Union Pacific's senior manager of heritage operations, who will oversee the restoration at the railroad's steam shop in Cheyenne, Wyo.

Dickens and his crew recreated the chalk inscription on No. 4014 when they began to move it.

Big Boys are 132 feet long, including the tender, which carried coal and water. They weigh 1.2 million pounds with a full load of fuel. They are essentially two engines under one boiler, with two sets of eight drive wheels, each set powered by two enormous cylinders nearly 2 feet across.

Big Boys are so big that the front set of drive wheels has to pivot separately from the back set to get around curves. 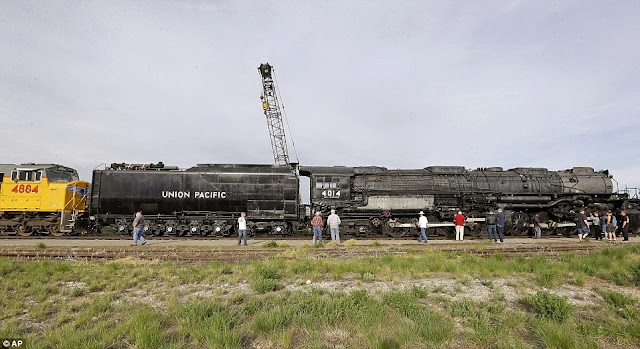 They aren't just huge either, they were fast.

They were engineered to reach 80 mph, even though the railroad never intended to run them that fast. The point was to fine-tune the locomotives so they stayed in balance at any speed and didn't beat themselves up with their own powerful forces.

'You get all that machinery to live in harmony,' McCulloh said.

Their enormous bulk also hid some slick engineering, including a suspension system that kept the drive wheels pressed against the rails when the locomotive straddled hills or valleys.

Seventeen Big Boys were scrapped when they were pulled from service, but eight survived and are on display around the country. Union Pacific chose the 4014 for restoration because it spent more than 50 years in the friendly climate of Southern California, at the RailGiants Train Museum at the Los Angeles County Fairgrounds.

Restoration is expected to take three to five years. The railroad would like to have the Big Boy operating by 2019 for the 150th anniversary of the driving of the Golden Spike in Utah, which linked the Union Pacific with the Central Pacific and completed the first transcontinental railroad.

It's too early to predict where the restored locomotive will travel. Railroad officials said they will have to choose the routes carefully to make sure bridges and tunnels can handle the Big Boy's weight and size.


There are a lot more pictures, a video and way more to this story at the link.

I used to live in south central Oregon, and every year the 4449 would make the trek, from it's home in Portland, to Sacramento. She would overnight in the town that I lived in, and then in the morning head south.
We used to wait at a crossing at Millers Island and wait for that monster to come by. By the time she got to us, she was doing probably 60mph, and I'll tell you what. That thing would just take your breath away as it thundered past!.

God, how I love steamers!