No more automatic blanket anonymity for you Pew Pew Pew Boys In Blue.

Of course they left a wide margin of latitude where the definition of "Officer Safety" applies.

The way I see it, this is a good way to keep track of trigger happy cops so they can be held accountable.

The case that started this was when the cops shot a guy in his yard holding a garden hose nozzle twelve freakin' times after a neighbor called and said there was an intoxicated guy with a gun running around and then the city paid out 6.5 million for their reckless behavior.

Police agencies generally must tell the public the names of officers involved in shootings, the California Supreme Court decided Thursday.

The state’s highest court, in a 6-1 vote, rejected blanket policies by a growing number of police agencies against disclosure. The court said officers' names can be withheld only if there is specific evidence that their safety would be imperiled.

“If it is essential to protect an officer's anonymity for safety reasons or for reasons peculiar to the officer's duties — as, for example, in the case of an undercover officer — then the public interest in disclosure of the officer's name may need to give way,” Justice Joyce L. Kennard wrote for the majority.

“That determination, however, would need to be based on a particularized showing.”

The decision is likely to make it much more difficult for police agencies to withhold the names of officers involved in on-duty shootings.

“Vague safety concerns that apply to all officers involved in shootings are insufficient to tip the balance against disclosure of officer names,” Kennard wrote.

The case stemmed from an effort by the Los Angeles Times to obtain the names of Long Beach police officers involved in the fatal shooting of Douglas Zerby, 35, in 2010. The officers mistook a garden hose nozzle Zerby was holding for a gun.

Times reporter Richard Winton made a California Public Records Act request asking for the names of the officers who shot Zerby and the identities of all Long Beach officers who had been involved in on-duty shootings in the prior five years.

The Long Beach Police Officers Assn. went court to prevent the city from disclosing the names, citing the confidentiality of personnel records and a need to protect officer safety.

The police group and the city of Long Beach, joined by other California law enforcement agencies, argued that revealing the identities would endanger officers and their families because home addresses and telephone numbers can be obtained on the Internet.

The Times, backed by other media and California ACLU groups, countered that the public had the right to know the identities of officers who use lethal force.

Los Angeles prosecutors eventually revealed the name of the officers involved in Zerby’s shooting in a report that exonerated the police. The officers had been summoned by a neighbor who said there was an intoxicated man with a gun outside a Belmont Shore apartment complex.

A federal jury later awarded Zerby’s family $6.5 million after concluding that the two officers had behaved recklessly when they shot Zerby.

This pretty much says it all though, you can't spend money when you are dead. 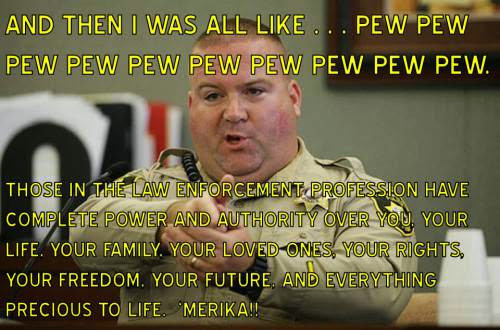