Apply Enough Pressure And Something Will Give

It seems that the people of Albuquerque haven't just thrown up their hands in disgust and walked away from their use of excessive force for everything police department.

They are after some heads to put on display and are totally disrupting City Council meetings and taking them over to do it.

After reading the following article I came to the conclusion that someone is going to forced out of a job if for no other reason that the city can't take care of it's business.

A group of more than 40 demonstrators forced the Albuquerque City Council to cancel its meeting Monday night after taking over the council chambers and attempting to serve Police Chief Gordon Eden with a “people’s arrest warrant,” KRQE-TV reported.
“This is no longer your meeting, this is the people’s meeting,” one demonstrator, University of New Mexico professor David Correia, told the council. “This is democracy in action.”
Eden and his department have drawn widespread criticism for what has been described as a pattern of excessive force, particularly following the release of footage showing shooting and killing 38-year-old homeless man James Boyd in March 2014. A report by the U.S. Justice Department last month blamed “insufficient oversight, inadequate training and ineffective policies” for the department’s regular use of deadly force.
On Monday, one demonstrator attempted to physically hand Eden a “warrant,” but he left the chambers without acknowledging her or taking the paper, while council members tried in vain to quell the unrest before them.
“We have no control of this meeting,” council president Ken Sanchez was quoted as saying. “So if this is your meeting, go ahead.”
Sanchez and other council members then said they were taking a 5-minute recess, during which time the protest continued, with calls for both Eden and Mayor Richard Berry to be fired. The Albuquerque Journal reported that the demonstration turned into a “People’s Council” meeting, which held votes of no confidence against Berry and Eden.
Sanchez later re-emerged to officially adjourn the meeting.
“It just seems like it’s been increasingly hard for us to even do our business, whether it’s about this or other matters,” council member Isaac Benton told the Journal. “If anything, it’s demoralizing for those of us on the council who are trying to do something about the problem.”


Let me explain something to Mr. Benton.

You should have taken notice of this little matter about 34 killings ago.

Talk about being fucking clueless.

In case you hadn't noticed Mr. Benton, your police force is completely out of control, even the Feds say so, in a kind of political ass covering sort of way.

The fact that the citizens of Albuquerque haven't shown up with pitchforks, torches and barrels full of tar and feathers is probably only because Amazon won't deliver them. 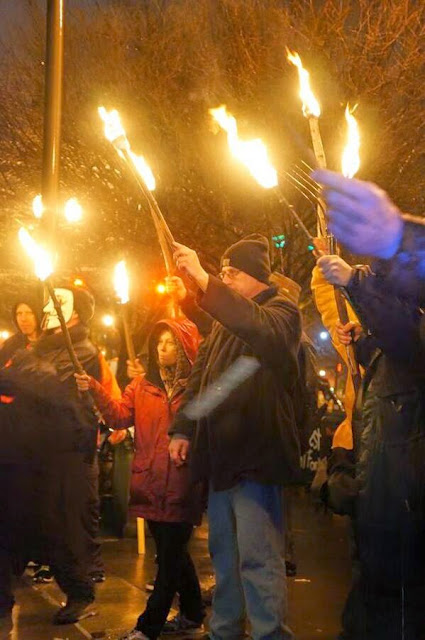 It looks to me like you are right there at that point though.

Someone is going to go, it's a matter of time at this point and it is way the hell overdue.

I see a lot more of this happening everywhere and not just about police the whole rotten government.

I live here, in ABQ. Actually, just far enough ought to skim over that shit. Catholics do not put up with much, even after blood money tries to buy off being really pissed. The last guy to fix things was flown over from Toledo. Are you fucking kidding, being from there is the reason I am here. The wife is from Akron, not her fault, either. I used to live in Iowa, it is a hell of a thing to pine for previous hellholes. I hear the artic circle gets kind of quiet concerning cop stuff, just weather.

Actually, Amazon will deliver pitchforks and torches. The tar and feathers, your on your own.