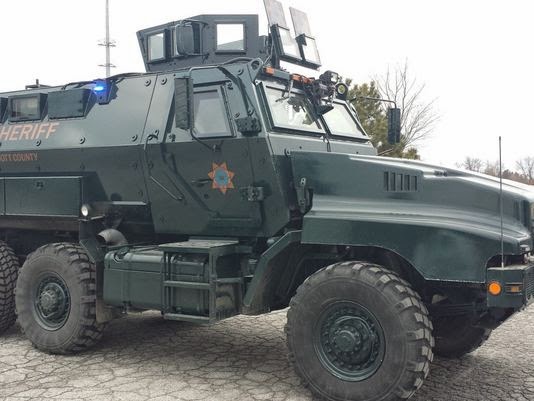 WASHINGTON, Ia. – The police chief has yet to mount flashing lights and a siren and plaster his department's official logo on the sides of his new vehicle.

Not that Greg Goodman needs such window dressings so that this 49,000-pound, 10-foot-tall, six-wheel-drive behemoth will cause necks to crane and local motorists to veer out of the way.

Twenty-nine years ago when he joined the Washington Police Department, Goodman never imagined he would crave such a thing. The newest and by far bulkiest addition to his fleet makes a Chevy Tahoe SUV look like a Hot Wheels collectible: a fully armored military vehicle designed to prowl a desert war zone.

This MRAP — pronounced "em-rap" and short for Mine Resistant Ambush Protected — is the talk of southeast Iowa.

Military recycling after more than a decade of warfare in Iraq and Afghanistan has led to this: Through a federal program, seven of these metal beasts have been donated to Iowa law enforcement agencies — five of them in recent weeks.

These are high dollar items.

It could be much, much worse, The U.S.government has decided to either abandon or destroy BILLIONS of dollars worth of war making equipment as they pull our forces out of Afghanistan.

I can only imagine what they would be doing to dispose of all that equipment if they had decided to pay to bring it all back home.

Every podunk police station in the country would be armed to the teeth with offensive weapons.

Goodman and his counterparts in other cities tend to describe the MRAP as merely "another tool" to keep officers safe when a pistol and body armor are insufficient.

Washington's "Crisis Response Unit" (a mobile command center) is just an old, converted ambulance. And none of its squad cars are bulletproof, let alone designed with a v-shaped belly to deflect bomb blasts.

So Goodman envisions the MRAP as an extreme option during tense standoffs, (God forbid) school shootings or even a tornado.

"I hope it's not used a lot," he said. "That means things are going very well."

The Washington City Council took convincing before it approved this controversial freebie, and Councilman Robert Shellmyer held firm last month with the lone "no" vote that he wears as a badge of honor.

"We're being laughed at," said Shellmyer, 78. "I went to Ainsworth the other day, and everybody wants to ask me if we're sleeping better at night now that we have the 'tank.' "

As it is, these armored monsters have the ability to drive through a house.

One aspect that all these police departments seem to overlook while they are kicking the tires and drooling over these huge vehicles is the costs to operate and maintain these things.

At five miles to the gallon and hundreds of dollars just to change the oil, these costs are going to become a real issue when these bills start getting handed to the taxpayers.


I can imagine where they come to the point that they tell these police chiefs that you either decide to keep this thing or start laying off employees.

Police departments all over the country are already having trouble getting enough money to keep up the level of services they have become accustomed to.
Throw one of these in the motor pool and watch what happens in the next couple of years.

I think we are in agreement. In an environment where every state and local government is crying about budget woes, I can't see how they justify owning and maintaining these vehicles that clearly have limited use in normal day-to-day law enforcement.

The military donated a HMWWV to Death Valley National Park some years ago. For a while the Park Service patrolled the backcountry in the thing, but no more. The Park Service still has it, but they drive it only when there's a need for some desert rescue where their normal vehicles can't make it, maybe twice a year. That's because of exactly the reasons you mentioned -- the 5mpg of expensive diesel #2 that it burns, and the multi-hundred-dollar oil changes. They have a good mechanic on staff who knows how to take care of it (he maintained'em when he was in the Army), but it's just too frickin' expensive to operate on a regular basis.

And war is real expensive - not so much so if you don't have to pay for it like we do. There are maybe five hummers sitting behind the county jail in the center of town. Never seen one move and they probably are unable to. There's little money in this town of less than 3000 and the county is the same. The last big excitement here was this - http://oakcreekforum.blogspot.com/2011/08/yikes-dougherty-gang-is-in-town.html and fact of the matter is that they ended up being captured here along the interstate. There was a recent murder several months ago and not a peep from the badges. They might be busy changing oil in these presents from our masters as a reward for our tax dollars paying for them to be used in corporate warfare around the globe.

Let all of this shit wherever it is sit and rot - then it can't be used against us.

I am a veteran of OIF as a Combat Engineer. I did Route Clearance op in these MRAP's. I also believe that the PD's that are taking these do not realize how much upkeep it takes to keep these vehicles going, and as the tittle says Mine RESTANT Ambush Protected. We lost over a dozen of these MRAP's during our entire tour, and what is the most astounding is that it did not take much in the form of a true IED to detroy these MRAP's.

We had one loss where the insurgents buried a 5-gallon plastic bucket filled with the classic ammonium-nitrate fuel oil mix. This was detonated directly underneath the main hull. The entire drive train was obliterated and the main hull was twisted liked an aluminum can. Now granted, every one inside the vehicle walked away unhurt, once you leave the protection of these vehicles, you are now at the mercy of small arms or heavier weapons attack.

Another point about these monster MRAP's, They HAVE to operate as a team with other MRAP's, or you will end up just a fish in a very small bucket.

I saw a nice video on You Tube on how to take one of these out with molotov cocktails.
C.J.

Thanks for the info.

Interesting bit there about having to operate as a team.


People tend to forget that they are basically a heavily armored Big Rig All Wheel Drive Truck.

One other point I thought about later was , exactly what are their options of disposal after they turn into an Albatross around their necks?

I would think the PTB's would shit down their leg if one of these ever ended up in a civilians hands.

That pretty much leaves the scrap yard.

Under the rules regarding disposal of contributed military gear, they have to turn it back over to the military at its end of life, because it is still officially property of the military. The military then scraps it via their usual system.