When you look up the definition of that word, you will see this picture, 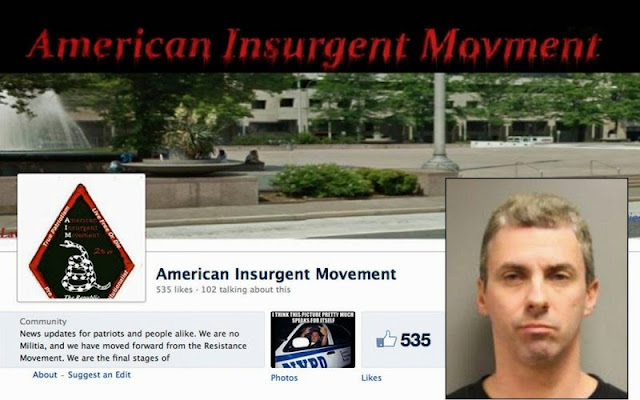 
Robert James Talbot, Jr. woke up on the morning of March 27 ready to carry out the plan he’d allegedly been concocting for months. He drove to a storage facility in Houston, Texas where he met the three other members of “Operation Liberty.” According to a criminal complaint filed against him, Talbot had recruited his teammates via a Facebook group called the American Insurgent Movement to help him rob armored cars; the first phase of his larger scheme to kill police officers and blow up mosques and government buildings. Talbot allegedly provided his team with detailed maps of the financial institution he wanted to target, and escape routes for best avoiding law enforcement. He put two Composition 4, or C4, plastic explosive devices in his black backpack and asked one of his team members to read a “manifesto” he’d brought with him.

“We must rebel. There is no other option,” it read, according to the complaint. “Blood and bullets are the only two things that will change this world, short of divine action.”

On his way to carry out the robbery, Talbot was arrested by an FBI SWAT team.

Of course, two of the willing "team members" were undercover FBI agents who strung this fool along until he had enough rope to hang himself with.

According to the complaint against him, the FBI began investigating Talbot in August 2013 after he unwittingly met with an unnamed informant and allegedly expressed his desire to rob banks and use that money to equip his “resistance” group with weapons with which they would kill law enforcement.

Over the next eight months, the FBI complaint alleges, Talbot set his plan into motion: He created a Facebook group titled “American Insurgent Movement” or “AIM.” He described it as “a Pre-Constitutionalist Community that offers those who seek True patriotism and are looking for absolute Freedom by doing the Will of God. Who want to restore America Pre-Constitutionally and look forward to stopping the Regime with action by bloodshed.”

Say goodbye to this moron for the next twenty years.

The article then goes on to paint all Patriots with the broad brush of the government approved Southern Poverty Law Center definition.

What is clear from the American Insurgent Movement Facebook page, is that whoever created it identifies with a wide-range of radical, right-wing, anti-government beliefs often ascribed to “Patriotism.”


I'd like to slap the taste out of someones mouth for that crap, twice.

There is a whole lot more in this article, I tried to cut it down for brevity.

You can read the rest here, if you can stomach it.

No, that's long enough. I can only take so much stupid in one sitting.

In a lot of cases, it's the mole that wants to instigate violence. If I was with a group and one of them started talking about bombing something or some other crime, I would immediately draw my sidearm and shoot them in the head. A backhoe covers up a lot of mistakes.

The reality is that violence is never the way to gain popular support. Most people hate violence, it gives them a queasy feeling in their stomach. We have a revolution every four years here in America called the VOTE that allows us to change out our entire government if we wish, and far more Americans prefer that option to all that blood on the streets stuff. The way to conduct a revolution in America is to get more votes than the other guy. FDR managed it in 1932, and Ronald Reagan managed it in 1980, so don't say it can't be done.

If he wanted to resist, he should have started a blog and put up pics of camel toes like everyone else.
C.J.

One really does have to ask wh4ere he got the C4? Is this going to be another FBI sting where they find one of lifes losers and turn their rantings into action by facilitating all the equipment, finance and planning!

Oh meant to add it's funny how the US government can seek to subvert an entire foreign government and it's legal, but when the boot is on the foot!

I agree, I hate violence as well and this guy is an idiot, But it seems our votes do not matter anymore. We know there was massive fraud. You have the IRS harassing conservatives on top of that. Its not a level playing field anymore. The ends justifies the means for the left. They have no morals.
C.J.

CJ, as far as I know, every single ahole in Washington D.C. got there by getting the plurality of votes in his or her district. There are plenty of alternatives who run in the party primaries but we keep voting for the guy with the glitziest ads and most bribes err "campaign contributions" every time. If we don't like our government, we can find the reason by looking in the mirror.

Cj is right. Our elections are rigged.

Bad Tux, you are so wrong it makes my teeth hurt. The only thing a Leftard knows is fear, not fear of losing elections, but fear of pain, suffering and death. It is clear that stealing elections is not as complicated as it seems.

So if you take out a few key Lefty sycophants, key supporters and official mouthpieces, who don't have personal security, even a dimwit like Debbie Wassermann-Schultz would soon figure out the gig is up. Lefties would be pissing all over themselves to get back to Berkeley, San Fran Cisco and Greenwich Village, where they can sit around, sipping lattes and snorting lines, reminiscing about the good old days.