They have been hammered with so many applications that they say the average wait now is NINE MONTHS! 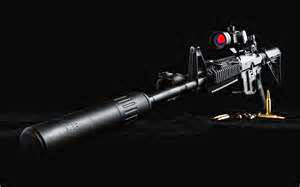 NEW YORK - Sales are booming for silencers, the cylindrical devices used to muffle gunfire.
The civilian market for silencers soared 37% in 2013, when the total number shot up to nearly a half a million, according to the Bureau of Alcohol, Tobacco, Firearms and Explosives registry. That's compared to 360,000 in 2012 and 285,000 in 2011.
Silencers are so popular that there's a nine-month wait to have a registration approved by the ATF, according to Ben Shim, a certified firearms instructor and gun industry analyst with CRT Capital Group in Stamford, Conn.
"People have gone crazy buying guns, but they're done buying them for the time being, so they're buying accessories," Shim said.
Many gun owners rushed to buy assault rifles after the Newtown massacre, fearing that a weapons ban would be enacted. Now, Shim says, those owners are customizing their guns with "a dizzying array of accessories." Add-ons include silencers, flashlights, laser scopes, stocks, pistol grips and rail systems for attaching even more accessories.
"The AR-15 weapons platform is very modular," said Shim, referring to a type of rifle used by the U.S. military. "It's like Barbie for men."
Silencers attach to the end of a gun barrel and can be used with a variety of handguns and rifles. They are more accurately referred to as suppressors, since "the noise of a chambered round being fired is never silent, only suppressed or dampened," said gun industry analyst Brian Rafn of Morgan Dempsey Capital Management in Milwaukee.
The popularity of suppressors is driven in part by the value they offer to hunters, said Rafn, because they "give the hunter multiple shots without frightening the game."
ATF special agent Tim Graden said that silencers are categorized as firearms by the federal government, even though the silencer itself can't fire a bullet.