This could have been bad.
Very, Very, Bad.

Authorities say four workers were injured and about 200 residents were evacuated after a large explosion and fire Monday morning at a natural gas processing plant in the eastern Washington town of Plymouth.

Benton County Sheriff Steven Keane says the fire from the 8:20 a.m. blast has been put out.

He says the explosion sent a mushroom-shaped cloud towering into the air, and shrapnel punctured a liquefied natural gas tank. Some gas leaked but did not ignite.

Deputies went door to door throughout Plymouth, along the Columbia River, and evacuated people in a 2-mile radius.

Buses were provided for those without cars, and a shelter was set up across the river in Oregon at the Umatilla County Fairgrounds. As part of the evacuation, Highway 14 and railroad tracks were shut down.

I rode nearby past this thing a couple of weeks ago.
It's out in the middle of nowhere, which is by design I'm sure.

They have one tank there that has ONE BILLION cubic feet of gas in it.

Can you imagine if that had blown?
There would be a crater a hundred feet deep and a quarter mile wide. 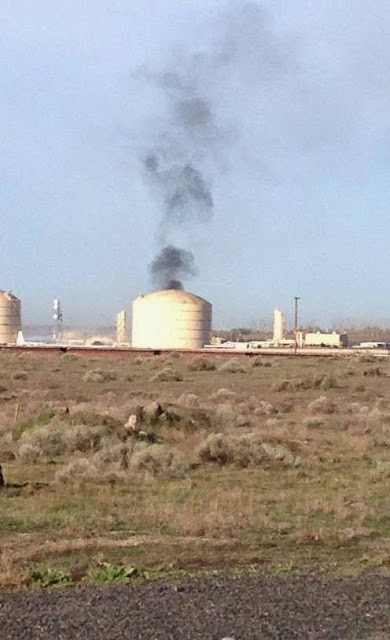 PLYMOUTH, WA. - The Benton County Sheriff's Office says the cause of the incident at the Williams Northwest Pipeline Facility was a bursting pipeline, sending a chunk of the pipe into a tank that contains liquid natural gas.

Deputies say they're waiting for the tank to drain in order to start repairs. They say the tank contains a billion cubic feet of natural gas which is still flowing and leaking through the pipe.

Crews have also changed the location of evacuation from the Hermiston Convention Center to the fairgrounds in Hermiston.

Deputies say they have expanded the evacuation area to within two miles of the facility.

Investigators are trying to figure out what caused the pipeline to burst.

I think I would be extending that evacuation area if it were me......

Good thing it didn't explode !
I have cousins who live in Plymouth !!

This is getting strange - seem to be a few munition plant explosions occurring in 2013 - 2014. Maybe a little too many for coincidence ?

Really lucked out on that tank not lighting up, that explosion last year in Garland Texas is still causing waves.

Evac areas for that sort of thing are measured in miles, not feet. Holy crap.