They Must Have Looked Under The Couch Cushions 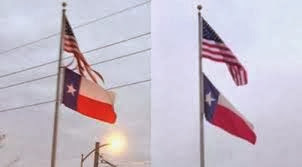 (I wonder where the power lines went?)

HOUSTON -- The Kenswick subdivision, just north of Bush Airport, is getting a lot of attention for all the wrong reasons.

The American flag that flies above the entrance was in shambles. A concerned viewer e-mailed us about it.

The HOA said it didn’t have the money to replace the flag, and residents were upset.

After KHOU started investigating, the flag was replaced Friday evening.

Fuckin' assholes got called on their bullshit and got a dose of public opinion. Like every other weasel motherfucker, a little negative publicity and they all of a sudden announce they can make it happen after all.

Someone needed a good slap upside the head for not handling it before it got that bad anyways.

The HOA said it didn’t have the money to replace the flag,??? WTF???

You can buy a flag at Wally-world for 20 bucks. I hate HOA's. SW was looking at a house until I found out it had one. Fuck those nazi bastards.