Smile At The Camera

They can watch an entire city and focus one of 65 cameras down to the point they can see the cell phone in your hand, 24/7, from 3 miles up.

I wonder if one of the former Soviet Union countries has any spare SAM missiles on Craigslist?

One new drone with the ARGUS technology has the capabilities of 100 Predator drones and you can guaran-fucking-tee there is one coming to a city near you.


New drone technology "equivalent to the capabilities of 100 Predator drones"


As DARPA describes the project:

The ARGUS system can simultaneously view an area of 15 square miles from an altitude of 17,500 ft. While never losing track of the greater image, ARGUS can allow users to open up dozens of zoomable sub-windows and track individual vehicles and people anywhere in the city-wide field of view. It can spot objects as small as six-inches wide.

"There's actually enough resolution to be able to see the people waving their arms or walking around; what kind of clothes they are wearing," said Antonaides, pointing out a bird flying in the air several miles below the camera.

The system is capable of streaming a million terabytes of HD video every day, which is the equivalent of 5,000 hours of high definition footage. This immense trove of data is capable of being stored in perpetuity, so that the government can "rewind" the video and view things that have gone on under the drone days or weeks earlier.

"If we had our choice, we would like ARGUS to be over the same area, 24 hours per day, 7 days a week," said Antonaides.

The technology is intended for unmanned drones, but has also been outfitted on Blackhawk helicopters.

What to Expect from ARGUS

The government remains tight-lipped about where ARGUS is deployed. It has certainly been applied overseas in America's unending global war against people who don't like foreign governments intervening in their countries. As we have witnessed, most wartime gadgets are perfected on foreign populations, and ultimately make their way back to the USA to be used against the citizens.

The government has big plans for its nearly billion dollar project. It continues to pour money into the system to integrate things like infrared vision and other advanced imaging features.

In the near future - as more of these platforms are deployed - it would be a fair assumption that every major U.S. city could be monitored and recorded from above nearly continuously, by ARGUS and other varieties of drones.

ARGUS, with the capability of opening up 65 independent close-up surveillance windows within its greater image, gives the government the potential to set up a formidable surveillance dragnet from above. The drone operators could set-up dedicated windows to monitor a targeted individual's home, workplace, all his friends' homes, all his relatives' homes, and all of his favorite hangouts, if so desired. 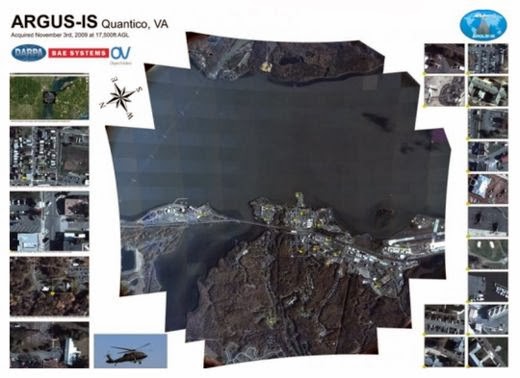 Besides simply spying on Americans' every movement, the drones may take on other roles in law enforcement, with many dangerous implications. U.S. Attorney General Eric Holder says that it would be legal for an armed government to target and kill Americans on U.S. soil in an "extraordinary circumstance."

In case you have been living in a cave without news for the last ten years, they have been practicing these capabilities in places like Pakistan and Yemen for years now.

I wonder if they will be able to see my big ole' hairy ass, when I moon them.