Anti Gun Mommies Get "Ambushed" At Their Meeting

Four ladies who are members of MDA (Mom's Demand Action) went to a restaurant in Texas to hold a meeting and were caught flat footed by forty gun enthusiasts who showed up to protest and sat in the parking lot for two hours with their guns, waiting for them to come out.

On Saturday, nearly 40 armed men, women, and children waited outside a Dallas, Texas area restaurant to protest a membership meeting for the state chapter of Moms Demand Action for Gun Sense in America, a gun safety advocacy group formed in the aftermath of the Sandy Hook Elementary School shooting.

According to a spokeswoman for Moms Demand Action (MDA), the moms were inside the Blue Mesa Grill when members of Open Carry Texas (OCT) — an open carry advocacy group — “pull[ed] up in the parking lot and start[ed] getting guns out of their trunks.” The group then waited in the parking lot for the four MDA members to come out. The spokeswoman said that the restaurant manager did not want to call 911, for fear of “inciting a riot” and waited for the gun advocates to leave. The group moved to a nearby Hooters after approximately two hours.


MDA later released a statement calling OCT “gun bullies” who “disagree[d] with our goal of changing America’s gun laws and policies to protect our children and families.” The statement added that the members and restaurant customers were “terrified by what appeared to be an armed ambush.” A member of OCT responded by tweeting, “I guess I’m a #gunbullies #Comeandtakeit.”

I see the point here but I have to disagree with the tactics.
I don't see the need to scare the shit out of a bunch of people who have no dog in the fight and were just trying to have some damn lunch.

Freaking them out so bad they wouldn't come out of the place for two hours is even worse. 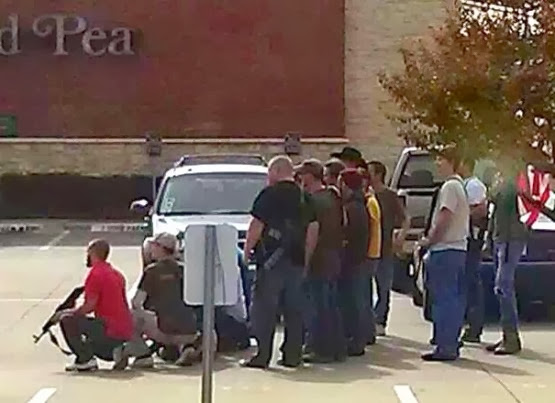 Apparently this isn't the first time this has happened either.

This is not the first time that gun advocates have rallied at MDA events. In March, a group of armed men crashed a MDA gun-control rally in Indianapolis.

Bad form in my book, you are not helping your cause and are instead seriously reinforcing a negative image.

That makes all gun enthusiasts look bad and we don't want that.

This is the kind of shit the media laps up and runs with, it makes their job easy.

I had a couple of comments hammering me about the picture above being taken out of context.
Here is the graphic I swiped from An NC Gun Blog as pointed out in the comments; 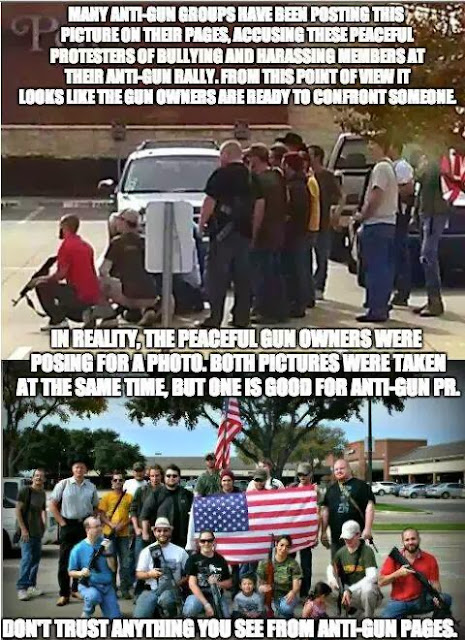 Standing behind the flag does not change my opinion of their tactics.

I am very much Pro 2nd Amendment but I still think intimidating a whole restaurant full of people who have no idea what is going on between the two groups is a bad idea.
The fact that a different picture is needed to counter the bad PR this caused proves my point.

I'm still in a bit of shock to see this but Borepatch has linked to this post and has an opinion.

How about getting the picture that was meant to be taken... That group shot was taken from the side. If you see what they were POSING for, they have an American flag being held by the standing men and they were (once again) POSING as a group shot. Even pictures can be taken out of context...

Take a look at the picture from two different perspectives.

It's amazing what camera angle will do.

I saw the picture and it doesn't change my opinion of their tactic in the first place, sorry.
For fairness I will post it though.

Phil, you might have tried a little more fact checking before swallowing anything said by the MDA as being factual. The ONLY ones in the restaurant for 2 hours were the 4 MDA broads. Other customers were coming & going as they pleased. Of the 2 photos above, the frontal pic was taken by request of the mda & while the OCA group was posing, one of the mda stole around for the side pic to use in their smear campaign against gun owners. Quite frankly, attempts to appear reasonable in the face of intimidation by hoplophobes such as the mda, by making appeasements towards the hoplophobes demands seem to do nothing to sedate their fears, then maybe it is time that we play by the same rules they do.

I think my big mistake was using the Think Progress article in the first place as they are notoriously slanted to the left.

Thanks for your thoughts on the matter.

Borepatch linked to this and agrees with me about the negative image it represents.

I don't see the need to scare the shit out of a bunch of people who have no dog in the fight and were just trying to have some damn lunch.

Freaking them out so bad they wouldn't come out of the place for two hours is even worse.

Okay, the only people reporting they were scared and stuck in the place for 2 hours are the people with an anti-gun agenda.......think that could just be propaganda on their part?

And considering there is a possibility one of the MDA ladies ask the Open Carry Texas crowd to pose for the picture, I really doubt they were truly freaked out.

But given it is a possibility, I have to ask "So EFFING WHAT if they were freaked out?"

Isn't there a point in time where we remind people there is a limit? Shouldn't the people advocating banning / greatly restricting our rights know there are consequences to their actions?

I'm not saying pro-rights groups should make threats -- and we can not let them state that simply carrying / possessing firearms is a threat -- but there is nothing wrong with showing folks we will resort to the ultimate reason for the 2nd Amendment; resisting tyranny.

I have talked before about the failure of others to take advantage rude and obnoxious advocates -- we can use their actions to frame the debate.

-- Oh, you think Openly Carrying a firearm is threatening; how do you feel about the police, security guard, Secret Service doing it?

-- Oh, they were rude to folks....okay and what law did they break, what harm other then to someone's precious feelings did they do?

-- See, even when they are obnoxious, they follow the law.

-- Hey, I don't like their actions either but they are completely legal and let's talk about how ridiculous the laws are. Why does it make sense to be able to carry a rifle or pre-1899 pistol but not a modern pistol openly?

-- Does anyone else think it is hilarious that a meeting of the state's MDA can only get 4 people to show up but a counter protest had 10 times as many people there? Just how popular is gun control really.

but I still think intimidating a whole restaurant full of people who have no idea what is going on between the two groups is a bad idea.

And how much are we, the gun bloggers, contributing to the problem -- especially the perception that simply carrying firearms is considered "threatening" ?

Isn't that like saying "Hey, I understand some people are threatened by Concealed Carry therefore we shouldn't do that because it might intimidate someone?"