I have to say that it warms the cockles of my black little heart to finally be able to see some good news in our fight for our Second Amendment protections.

First off this week of course, was the successful recall of two of the major backers of the draconian gun control measures passed in Colorado that went into effect recently.

That oughtta give some of the rest of those sonsabitches reason for pause in that arena.

The vote, which came five months after the United States Senate defeated several gun restrictions, handed another loss to gun-control supporters and gave moderate lawmakers across the country a warning about the political risks of voting for tougher gun laws.

The immediate effect of the recalls — the first of their kind in Colorado — was to remove two state senators, Angela Giron of Pueblo and John Morse of Colorado Springs, and replace them with Republicans.

The second bit of good news and of far greater import in my opinion was the reaffirmation of a Supreme Court ruling back in 2010 that said every city and state must abide by the Second Amendment .

The U.S. Supreme Court ruled in 2010, in a case challenging Chicago's gun restrictions, that every state and city must adhere to the Second Amendment. The ruling did not strike down the Chicago restrictions directly, but sent the case back to a U.S. appeals court for review.

In December 2012, the appeals court ruled that Illinois's ban on concealed carry was unconstitutional and gave the state six months to create a law allowing guns to be carried in public.

That six month period is now up and amid much gnashing of teeth and rending of garments, the Chicago city council was forced to vote to remove a gun registry requirement that has been in place since 1968 and now must also get right with an Illinois law passed in July permitting concealed carry in that state.

Illinois approved a concealed carry law in July, giving control of gun regulations to the state and essentially nullifying Chicago's power to require that gun owners register their weapons and have a city firearms permit.

Chicago on Wednesday reluctantly abolished a 45-year-old requirement that gun owners register their weapons with the city, marking a victory for advocates of gun rights such as the National Rifle Association.

The city council voted to end the gun registry in place since 1968 to comply with court rulings against Chicago and Illinois gun control laws, and to bring the city into line with a state concealed carry law.

The sniveling of that little rat bastard Rahm Emanuel was especially sweet to my ears.

"I happen to think the court's wrong. I think their interpretation is wrong," Chicago Mayor Rahm Emanuel said of the rulings that forced Chicago to eliminate the registry. He spoke after the council voted.

There is that word again, did you notice?

The clarion call of these gun grabbing motherfuckers.

The Second Amendment needs to be..... interpreted.

As I dance a little jig here in my humble abode over this very welcome good news, I am forever mindful that it seems two of these kinds of assholes seem to appear out of thin air every time we manage to finally get a win in on them but it is still very welcome news.

Oh, and by the way Rahm, I have a personal message for you ya little power mad freak.
I haven't forgotten who the architect of NAFTA is either. 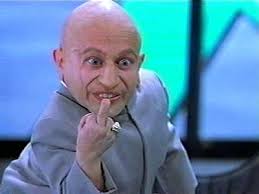