Now I Gotta Find A New One Dammit 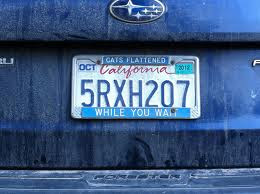 I saw that on a bumper sticker once and about died laughing.
I told my Dad's cousin about it a few years later and about six months after that I got the plate frame in the mail.
It immediately went on my little Sprite.
Ohhh, the grief I get from people with no fucking sense of humor, I tell ya.
I've got four fucking cats running around this joint, give me a fucking break.

I was out in the garage the other day working on the miserable little sonofabitch when I noticed that my beloved plate frame is broken!


Oh the humanity!
I've had that fucking thing for almost twenty years! It was the very first thing I put back on that car after I had it painted.

I will probably have to find some outfit on the internet and have one made.
Dang it, that just pisses me off, I have no idea how that fucker got broke.