What. The. Hell?
A hundred sixty plus on a fucking bicycle?!!

Some technical questions come to mind.

How did he not just fly off the track and start climbing like a bottle rocket with wheels?

How did the little skinny tires not just disintegrate?

Was he fucked up out of his mind and lose a bet?


A French cyclist has broken the land speed record on a bicycle by attaching a hydrogen-peroxide rocket to the frame.

Francois Gissy from Alsace recorded a top speed of 163mph (263kph) on his self-built vehicle on an old runway in Munchhouse in North Eastern France. 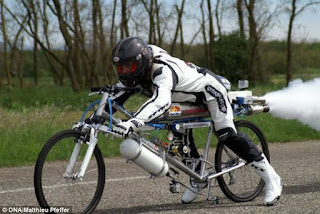 He either has a complete lack of concern for his personal safety or a set of balls that would make a bull elephant cry.

There is a video at the link.

You gotta see that.
He is holding on for dear life when that thing lights off.

They probably had to use a small crowbar to pry his puckered ass off the seat too.

Yep, the French are crazy.

They didn't show the resulting brown trail on the track.